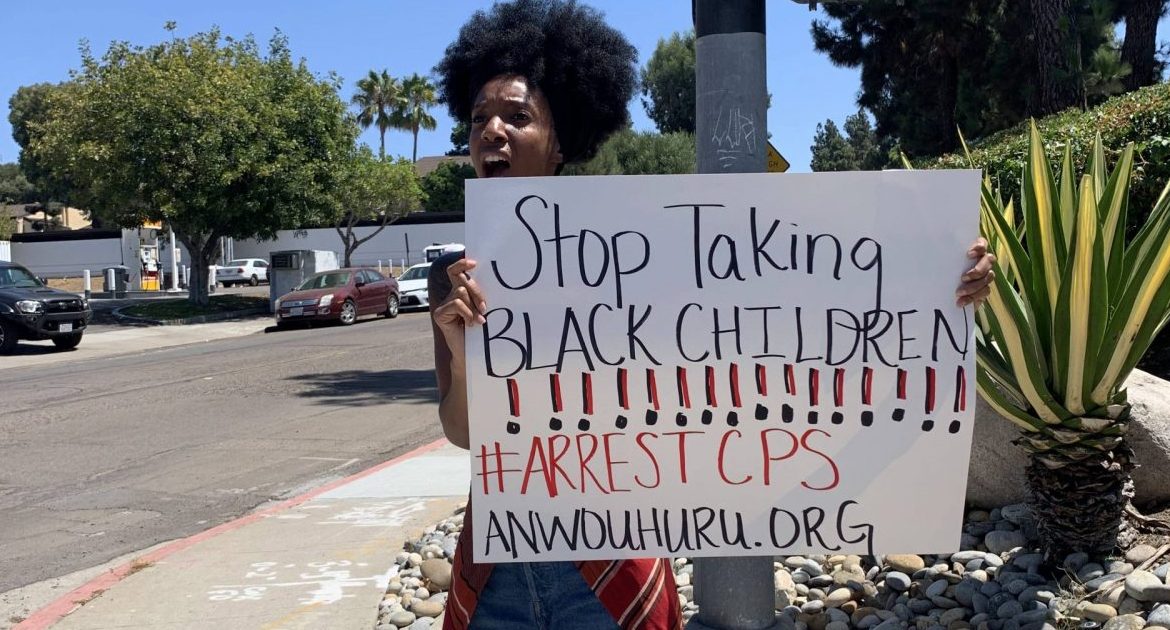 Another black child was kidnapped today, was the rallying call that the African National Women’s Organization (ANWO) put out on August 17th to organize the first national response to the colonial state-sponsored kidnapping of African children by agencies that work under the guise of child protection.

Earlier that week, a video had gone viral on the internet, showing the kidnapping of former American Idol finalist, Syesha Mercado, 10 days old newborn. Mercado’s first child, Amun Ra, was kidnapped just months earlier when the colonial state accused her of malnutrition when she went to a Florida hospital seeking help with weaning Amun Ra off breastmilk.

The video sent shockwaves throughout the country, inciting celebrities and other notable people to respond, which resulted in the return of her newborn. Her first child, Amun Ra is still in the state’s custody.

Months earlier, ANWO’s ArrestCPS campaign rallied for Aniya Butler, another African woman in Phoenix, AZ who has been fighting to regain custody of her daughter for the last year.

Unfortunately, these women do not have the same notoriety as Syesha and have slightly more complicated cases that do not get the kinds of support that garner unquestionable defense.

So, although Mercado’s case was in the forefront, something needed to happen to give voice to the many more working-class African women who have felt the cold hand of the so-called child protection services (cps) agencies around the country.

On August 20th, ANWO met with everyone who answered the call to protect African women and children and expose the parasitic nature of CPS.  We left that call with 6 cities uniting to mobilize and 3 more cities signing on afterward.

What resulted was demonstrations in front of CPS and Family Court locations in nine U.S. cities. This is the first anti-cps national mobilization focused on highlighting the significant ongoing devastating impact of the kidnap of African children, the un-mothering of African mothers, and the financial motivation behind the commodification of our children.

On August 27th, armed with banners and placards, we protested. Some places started as early as 9 am and others as late as 4 pm.  We organized impacted parents in Delaware, St. Louis, Portland, D.C., and Philadelphia.

In Washington, D.C. where CPS operates as the Child and Family Services Agency (CFSA), the intended isolation of families is glaring.   Located in the D.C. Government building in a gentrified section of SE, the entrance of CFSA is located separate from the main entrance, on the side of the building.  There is hardly any car traffic or foot traffic.  The building is flanked by Interstate 395 in the back and a dog park in the front.

No one is a witness to the tragedy that happens in that building. That is until we showed up. People who worked in other parts of the building didn’t even know that CFSA was there. People we spoke to on the street or driving by in cars didn’t know that the agency existed in their community.

In San Diego, social service workers, when seeing the protest, distanced themselves from the kidnapping of children. One person stated, “I just help people get food stamps,” and “I don’t think they should take these children.”

In Philadelphia, where CPS operates as the Department of Human Services (DHS), the building is located on a highly visible corner on a heavily trafficked street. It is a site where parents lose custody of their children and where they come to have supervised visits. Our presence garnered support from the unfortunate victims of DHS and passersby alike. We also drew the attention of the police. They attempted to force us off the public sidewalk but we won the struggle and stayed put.

Building the network and the community control of child welfare initiative

Our work on this issue did not begin on August 27th. We have been organizing against the state-sponsored kidnapping of African children since 2017. We’ve met with mothers, fathers, grandparents in the U.S. and Europe who hoped to liberate their children from the state. We’ve helped them with planning and advocacy, but more is needed. We can’t take on the counterinsurgent entity of CPS by fighting individual cases alone. It requires a web of organizers doing ongoing work to defend and protect the rights of African parents and children through policy and by creating dual and contending power institutions that replace the role of the state.

The ArrestCPS campaign is continuing to grow. We will continue protesting in front of CPS offices in different cities.

Register for our October 24th ArrestCPS Organizing Conference and join our efforts to build a movement with similar organizations doing this work.

We appreciate the offers of support that have already come in. We are looking for more supporters to work locally and on our national committees. We call on you to help us build infrastructures of defense and repair for parents victimized by CPS. Send your interest to arrestcps@anwouhuru.org.

We Charge you with Genocide!