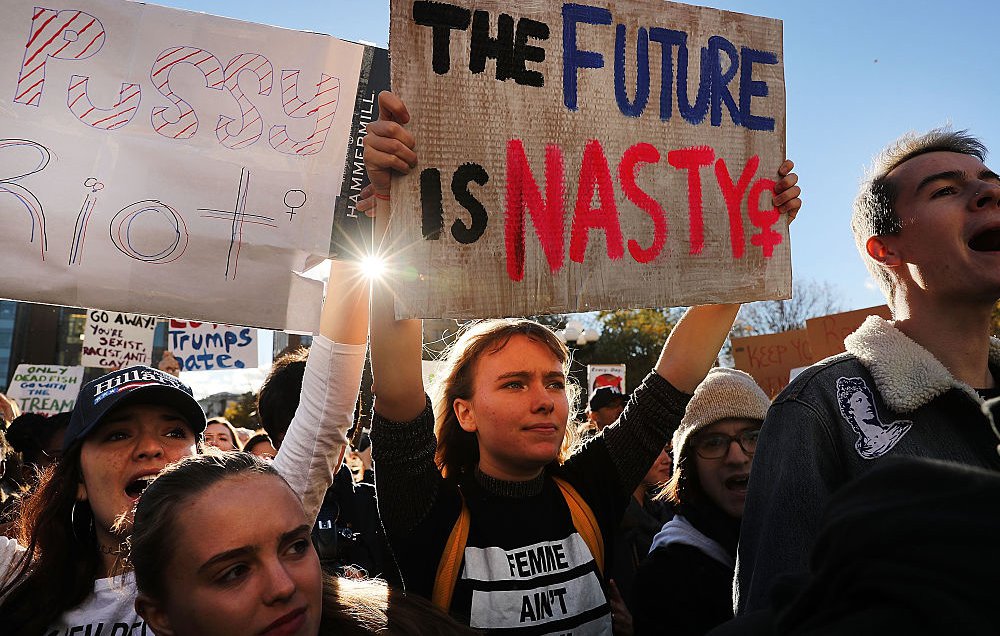 Imperialist Underpinnings of the Women’s March on Washington

About a week after white people overwhelmingly voted for Donald Trump, the Women’s March on Washington was born.

The March, also known as the  white women’s march, in some black women circles, burst onto the scene claiming to come to the defense of marginalized women who were targeted by the “rhetoric  of the past election cycle.”

Like me, you might be asking yourself how the Women’s March organizers intend to come to the defense of the black, Arab, other oppressed nation women and LGBTQIA communities.

According to their mission statement, they are coming together to show the new administration their “presence.”  THAT’S IT.  They want the Trump administration to see them.

The white women’s march does not even have demands, which speaks volumes about its class interests.  Any action rooted in the struggle of oppressed communities would have demands if they intended to hold anyone accountable.

Clearly there isn’t a working class character to this event because if there were, oppressed women confronted with the violence of gentrification, drone bombings, child theft, mass incarceration, deportation, kidnapping and police violence, would not be in solidarity with the gentrifiers, bombers, kidnappers and state agents and they most certainly would make demands of the State.

The fact that there aren’t any demands, isn’t surprising since the organizing team has known ties to the Democratic Party, which is just one side of the imperialist coin.

Imperialism never demands anything of itself;  it just jostles power, but always in favor of the ruling class.

Similar to a racially utopic United Colors of Benetton ads,  the co-chairs of the white women’s march appear to be a diverse group of women: 1 black, 1 latinx, 1 Arab, and 1 trans white woman, but when you scratch the surface, their diversity becomes more homogeneous through their links to the imperialist Democratic Party.

Two of the four co-chairs came from one of Harry Belafonte’s organizations. Belafonte is a known Obama supporter, who initially supported anti-reparations candidate Bernie Sanders but ultimately switched his support to Hillary Clinton; who is an enemy of black people.

The rest of the “organizers” are a hodgepodge of women who have ties to NAN and the White House.

So, without publicly saying so, the white women’s march is a strategy of the Democratic Party to win the demoralized oppressed masses back into the clutches of the U.S. democratic process.

What’s wrong with the Democratic Party organizing protest against Trump, you ask?

African Internationalism helps us understand that no matter who you vote for, Democrat or Republican, you are voting for imperialism. Both parties maintain the status quo which exploits and oppresses African and other nations of people.

Additionally, the insidiousness of this March is that white power is using it as a strategy to lump in the struggles of oppressed women with the issues of the oppressor (white women and trans white) women.

Until we end the parasitic relationship the oppressor nation has with the oppressed, there can’t  be a reconciliation.

Oppressed women must “accept suffering without retaliation” according to principle 4 of the group’s guiding principles.  In fact, all of the points highlight nonviolence as the path forward.

Listen, I understand that violence, anti-oppressive violence, violence to liberate, is not the choice of many; but how can a march for oppressed women dare ask the women who suffer through violent attacks, not to destroy the cause of our suffering. It doesn’t make sense.

No demands plus a nonviolent call to action, against an administration that is stacking the deck with known white nationalists and other oppressive characters, equals a recipe for more oppression.

The African National Women’s Organization (ANWO), has never called on African women to be defenseless.  We are clear that colonialism is  the  violent oppression of our people; therefore, we have mobilized women to challenge and expose the State, conducted community forums on state violence and how to fight back, and organized self-defense classes because we understand that African women have to be built up to push back the colonial violence we are confronted with on a daily basis.

Without an organization like ANWO,  African women are susceptible to these anti-self-determination movements that continue to lead our people into a burning house.

Don’t fall for the okey doke

The march is a big piece of propaganda that confirms for Trump and others in the ruling class, that we are not going to do anything.

It’s soft and doesn’t speak to the issues that oppressed women are confronted with.

Women who attend should expect a lot of peace signs, healing circles and calls to redeem your faith in U.S. Imperialism through a false sisterhood.

That’s ok though, because once you’ve OD’d on “make America great again”  ANWO will be there to recruit you.

End the oppression of African women!