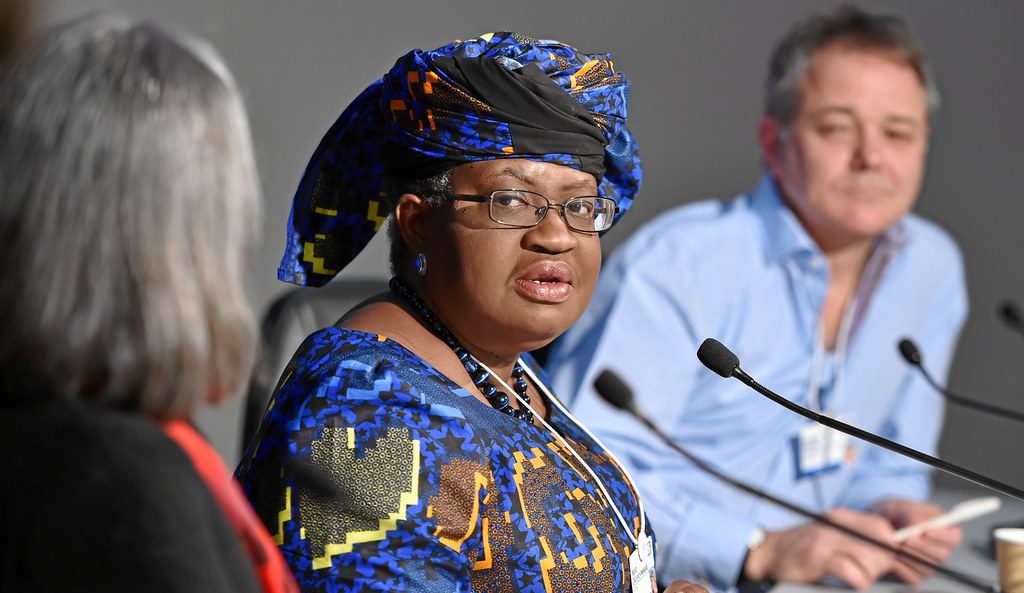 In February Ngozi Okonjo-Iweala (Nigeria) became the first woman and African to be selected as the Director-General of the World Trade Organization (WTO), after newly elected U.S. President Joseph Biden confirmed her nomination.  She has been described as  “strong”, “stubborn” and  “persistent” when it comes to her finance negotiation style while working in colonial and neo-colonial politics. There is no doubt that this description is meant to garner the appreciation of gender activists and feminists alike who clamor at the idea of women holding their own in male-dominated spaces.

Markedly this is an achievement for white power imperialism who are bolstering her as an African and a woman whose entire personal, educational, and professional history has been groomed by capitalist imperialism.

The bourgeois propaganda machine has portrayed her appointment as an achievement for African women.

Let’s be clear, she did not come up from the slums of Lagos fighting everyday obstacles such as poverty, class, violence to be where she is. Instead, she has been groomed to be a neo-colonialist.

As the daughter of a doctor (mother)  and economist and king (father) who worked for the U.N., she was born into Nigeria’s petty bourgeoisie.  Her primary and secondary education was spent at private schools that were established by English colonizers with the purpose of indoctrinating the “natives.”  From there she attended top white ruling class institutions of higher learning,  Harvard and MIT, earning degrees in economics.   She then went to work for the World Bank where she rose to the position of Vice President before becoming Nigeria’s first female Finance Minister; a position she held twice under two different Nigerian presidents, Goodluck Jonathan and Olusegun Olutoyin Aganga.

This, of course, is not the path that 97 million Africans in Nigeria can take, who represent the total number of the population who live below the poverty line.  It is this population and their participation in the informal (not directly tied to capitalist production) economy, that  contributes greatly to the actual working class social and political economy.

According to a 2011 World Bank report, 57% of women in Nigeria ages 16-57 were in some form of employment.  However,  the report laments at the fact that the employment is primarily in the informal sector, which it argues prevents women from benefiting from gender and equity laws.

Make no mistake, the World Bank’s interest in gender equality in Africa is the same as it has been since  Europe first attacked Africa, which is to use African labor and resources for the complete benefit of white power and to uphold the worldwide system of capitalism.

The desire to ensure African women have the same pathway into the capitalist economic system as African men,  strengthens the stranglehold that capitalism has on the economy and controls the labor value of the African workers.

Since Africa is still colonized, using black faces, all of its economies benefit the warring tribes of Europe who are once again scrambling to save themselves by maintaining control of Africa’s rich resources which include its people; access to which is being challenged by China.

The fight against capitalist economy

What Okonjo-Iweala and her ilk contribute to Africa is the ongoing disruption to the emerging African economies that develop out of the needs of the African working class, some of whom are the street vendors, local farmers, tailors,  and builders.

In her new role at the WTO, her first priorities are to broker trade negotiations between the U.S. and China, two countries who represent an increasing threat to economic self-determination in Africa.

Clearly, representation is not enough.   African women neo-colonial agents have to be disarmed through an examination of who they are and what they represent.  It’s not good to appreciate a black woman’s face on white policy, particularly when the policy robs us of our self-determination.  We must see a track record of substantive examples of how their policies contribute to the destruction of the colonialists’ shackles that imprison the majority of African women, relegating us to a life of subsistence and violence.

And while it may be easy to center the African continent in this article, I want to be clear that the strategies to inculcate bourgeois representations of progress in the African masses are everywhere, particularly in the U.S. where Barack Obama and Kamala Harris are clear examples of bourgeois propaganda in electoral politics.  Their black faces erase their criminal history against African and other oppressed people in the U.S. and in the case of Obama, Africa too.

“Representation Matters” forces us to consume the idea that the more the African petty- bourgeoisie accomplishes in the white ruling class arena, the more we have progressed.  Nothing can be further from the truth, particularly in the U.S. as Africans have experienced the devastating impact of COVID-19.

Representation in Africa, however, is centered around gender and ethnic identity, something that Okonjo-Iweala has used to deflect criticism of her policies. But when it comes to African women’s representation in government, Africa is actually leading more than any other place in the world.  Ellen Johnson Sirleaf became the first female President of Liberia in 2006; Joyce Banda became the first female President in Malawi in 2012. In Rwanda, 64% of the seats in parliament are held by African women. Yet, in none of these places have the special oppression of African women been lifted.

What we continue to fight for in the African People’s Socialist Party is a clear unapologetic defense of the African working class which includes the full participation of African women who have a selfish interest in African liberation. It is only with the destruction of capitalist colonialism will we begin to change the conditions for African poor and working-class women.  Having  African women petty-bourgeois representation does not and will not ever overturn the special oppression of African women.

Okonjo-Iweala and others like her do not have a selfish desire to free Africa from the grips of capitalism. They have been groomed by capitalism and launched as a weapon into the African colony to further wed African economies to the capitalist system.

African women must join the revolution through the African People’s Socialist Party. We have to build a dynamic legion of African women revolutionaries who can contribute to the growing numbers of people building for a liberated Africa by dismantling capitalist colonialism.   The time is now!

Down with the petty boo!

Up with African working class!