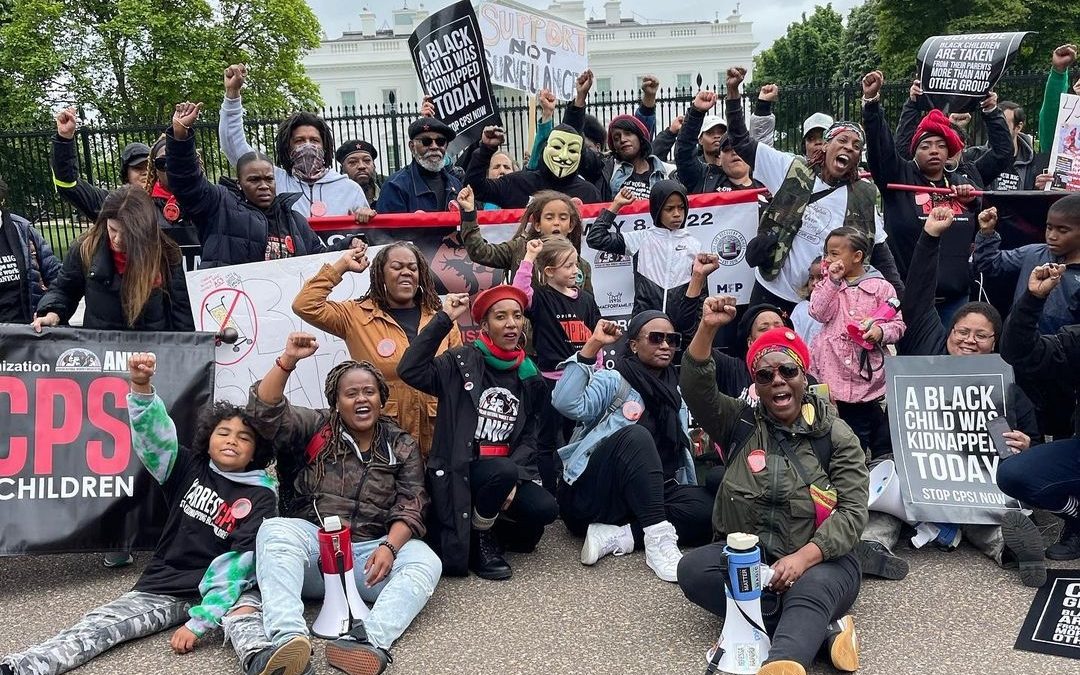 Black families converged on Washington, D.C. on Mother’s Day, Sunday, May 8, 2022, for the first-ever Black Mothers March on the White House to charge the U.S. government with genocide for the kidnapping of their children through the foster system.

The weekend started with a Know Your Rights Teach-In on Saturday at the Anacostia Arts Center in SE Washington, D.C. with featured discussions from lawyers and former social workers educating attendees about the problem and how we can protect ourselves against it through organizing and knowledge of basic rights.

The main event started on the morning of Sunday, May 8.  Under an overcast sky that threatened rain, nearly 100 people assembled in Lafayette Square Park located across from the White House. The mood was upbeat with music played by DJ Shakey flooding the park. As the pre-march rally began, protesters danced to Archie Eversole’s song, “We Ready”.

Protesters came from as far away as California, Pennsylvania, New York, Kansas, Florida and Georgia.

MC Demetria Hester enthusiastically welcomed supporters and introduced the speakers. Organizer Amanda Wallace from Operation Stop CPS opened up the rally acknowledging the moment and significance of the march. President Yejide Orunmila of ANWO spoke next, connecting the kidnapping of African children to the separation of black families on the slave auction blocks which laid the foundation of colonial capitalism. Like our African foreparents we may have to “rescue our children under the dark of night”.

Chairman Omali Yeshitela, the featured speaker, gave a dynamic presentation defining colonialism as the reason why black families have to contend with child protective services, saying, “They kidnap our children in the name of protecting our children from us, but the reality is that we wouldn’t be in this country if somebody hadn’t kidnapped us.  Every problem we have as a people has been imposed on us by this system [colonialism].”

Joyce McMillan of JMAC for Families and Erin Miles-Cloud of Movement for Family Power took to the stage giving impactful speeches condemning the family regulation system.

Impacted parent Tamara Summers, one of the mothers that inspired the launch of ANWO’s #ArrestCPS campaign, gave an emotional testimony of her experience that resulted in the removal of her parental rights. She hasn’t seen her children in six years.

The mobilization stepped off at 1:30 PM, moving through the streets of downtown D.C as protesters chanted, “CPS you can’t hide, we charge you with genocide,” and “Hey! Hey! Ho! Ho!, CPS has got to go,” carrying signs that said, “A Black Child Was Kidnapped Today, Stop CPS Now!”

Passing cars showed their support for the march by honking their horns, while people on the streets took pictures.

As the final leg of the march rounded 16th Street NW, down Black Lives Matter Plaza, with the White House in the distance, the chants got louder, “When Black Families are under attack, what do we do? Stand Up Fight Back!”

The march ended in front of the White House, with a group shot and words from Chairman Omali Yeshitela.

The protest reconvened in Lafayette Square Park at 2:30 PM for final speeches from organizers and mothers, cultural performances, and a Mother’s Day basket raffle.

After packing up, march organizers transitioned to the invite-only Big Table Talk, to develop a collective strategy toward building a national black-led movement against CPS.

The Black Mothers March will happen annually. The organizations pledged to stay connected over the next 365 days. We will find opportunities to align our work and continue to grow this burgeoning anti-colonial network against the State-sponsored kidnapping of African children. Stay connected at blackmothersmarch.com and Black Mothers March on Instagram

To volunteer with ANWO contact us at arrestcps@anwouhuru.org find out more about our campaign #ArrestCPS and The Black Mothers March on the White House was a ground-breaking success.