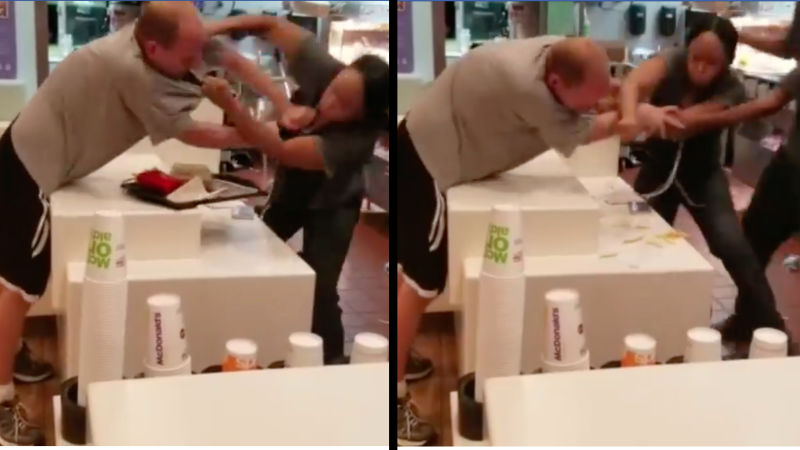 We are calling every concerned person, who is against colonial violence, to attend our action on Saturday January 5, 2019 at 3pm in front of the McDonald’s at 4595 34th Street South in St. Petersburg, Florida.

On December 31, 2018 white male, Daniel Taylor, attacked African woman, Yasmine James; a worker at a McDonald’s on the South side of St. Petersburg, Florida.

In a video posted on the internet, Daniel Taylor can be seen arguing with Yasmine James before lunging across the counter grabbing her by the collar and pulling her toward him.

James responded quickly to free herself from his grasp; by punching Taylor in his head and face, until he loosened his grip.  After Taylor was pushed back, he proceeds to snap his fingers and bark orders at the mostly African staff, demanding a refund and the firing of James, while also calling her names.

He is eventually escorted out of the store, but then returns to yell at the workers before kicking another African woman worker.

He was eventually arrested and charged with two counts of misdemeanor assault and held on $1000 bond.

At one point during the attack, Daniel Taylor yells, “I couldn’t control you” to explain why he resorted to violence after a defiant Yasmine James refused to serve him.

This is the culture of violence that define the white oppressor nation.

After all, it was the control of and violence against the African working class that established the hoarded wealth of the white world and impoverishment of the African nation, resulting  in the worldwide system of parasitic capitalism and colonialism, as explained by Chairman Omali Yeshitela of the African People’s Socialist Party:

“It was this savage aggression against Africa, Asia and the Americas that raised Europe from a disease-ridden habitat of warring tribes to a dominant force in the world.”

“Europe is today inhabited by a people whose sense of sameness is both defined and challenged by the unifying parasitic capitalist economy that puts them in opposition to the rest of the world upon which their economic lifeline depends.”

It was the four hundred years of forced labor and the unfettered access to African resources that created the pedestal of oppression upon which Europe and the rest of the white world sit, which is proven by asking the following question posed by Yeshitela:

“Would capitalism and the resultant European wealth and African impoverishment have occurred without the European attack on Africa, its division, African slavery and dispersal, colonialism and neocolonialism? The answer is No! No! No!”

The white world is shaking in their bootstraps, as their future is increasingly threatened by Africans and other oppressed people resisting the imposed conditions that define our current conditions as dominated people.

Yasmine James’  resistance to being controlled is representative of the same resistance that defines the African working class who are punching the face of capitalist exploitation and colonialism.

It is part of an ongoing culture of resistance by African people that has loosened the controlled grip which has defined our lives for hundreds of years.

This attack has raised questions about the protection of women, in general, as if this was just a question of James being a woman. As materialist we have determined that there is no such thing as women in general; the idea that all women have a common oppressor and that oppression is gendered.

The attack on Yasmine James by Daniel Taylor is part of the long history of  violence against the colonized and oppressed African working class, by the white oppressor nation.

It cannot be separated from the sexual violence, beatings, experimentation,  murders of African women and men that define the parasitic relationship that the white nation has had with us since Africa was first attacked.

From police and vigilante violence to state sponsored kidnapping of African children, the African poor and working class are most often confronted by of this colonial relationship.

African women are integral to African resistance. Not only in the physical momentary fight, but in the ongoing struggle to free ourselves from the grips of a colonial oppression.

Who better than us to help define what a free and liberated African people can look like? We are confronted with the specific oppression that comes from both the oppressor white nation and from within the colonized nation.

Therefore, we have the most to gain from destroying the oppressive conditions that come from capitalist colonial domination of our entire people.

We call on Yasmine and other African women to join the revolution; to join the African National Women’s Organization (ANWO) in order to really fight for ourselves and the women of the class.

The African National Women’s Organization is a membership-based mass organization created by the African People’s Socialist Party and is part of the overall Uhuru Movement; which was created to address the special oppression of African women.

As the only anti-imperialist, anti-colonial revolutionary African women’s organization, ANWO is leading on the everyday issues that impact the lives of African women.

Power to the African working class!