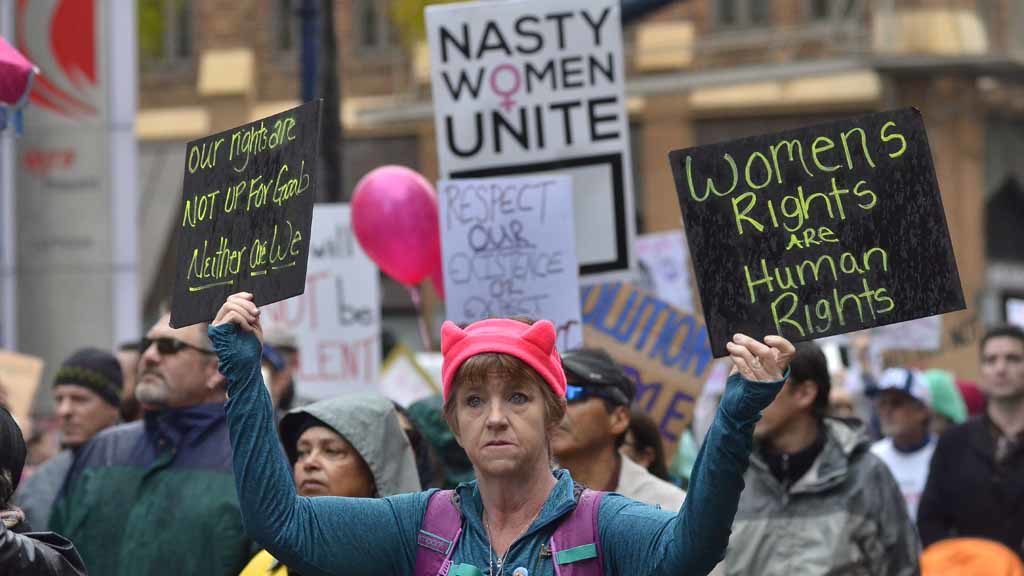 As many know, white women got together and decided to hold a national women’s march to show the unity of all women. However, from the onset, it was understood that this march was indeed going to be a march to address the fears of white women.

Even though the march was fronted by African and other colonized women, the idea for the march started when a white woman, Teresa Shook, from Hawaii, went to Facebook to express her outrage about Donald Trump winning the election.

Her outrage was so great that she created a Facebook event page for a women’s march, that quickly grew to over 10,000 attendees within the first week. The event page was followed by the creation of a website that started off with a simple statement of “unity”.

The website has since exploded into a donation page in need of $2 million dollars to cover the “logistics and expenses to put on the women’s March on Washington”. However, it is understood that permits are free in D.C. and there were no water bottles, bags or snacks passed out during this demonstration. There were just entertainers and a stage.

Regardless of the implied statement of unity, however, it was apparent that the March was not inclusive of poor and working class African or even of other colonized women . Even though the white media placed two African women as allies it was still a ploy to have African women be pawns for white women’s agenda, which has been the case historically.

During the marches, an overwhelming amount of women were white. It consisted of some of the 54 percent of white women that voted for Trump and now feel threatened by the attacks on the rights of bourgeois white women, which might have been protected if Hillary Clinton had been elected.

Marchers made no criticism of imperialism

As the protest began, it was clear from the messages on placards that this was merely an attack on Trump as person. There was no criticism about what he represented to U.S. imperialism or even how his policies could devastate already impacted communities.

As we began our organizing at the March on Washington, we were confronted with signs stating “This pussy grabs back”,“Nasty women”, and “Keep your tiny hands off my rights,” as opposed to messages speaking to deportations, mass incarceration, state violence or anything that would imply that this March was serious about challenging something besides what white women felt, was important

What was clear is that even though these women were opposed to Donald Trump they were still united for imperialism, as supporters of oppressor Hillary Clinton held signs reading “I’m still with her”.

What was also a clear indicator of this March’s aim to unify white women was the wearing of pink hats that represented white women’s vaginas (pink pussy). There are so many issues with this so-called statement of empowerment, but the dominant one being that these white women relegated all women to just a body part and a white woman’s body part at that. It was dismissive even of trans and other gender nonconforming women of the bourgeoisie.

There were also no signs of explicit activist groups represented in this coming together of white women. It was a singular unit of white women yelling at Trump.

African women appeared to be confused at what the goal was for this march and essentially where they fit in, in this sea of whiteness. But the reality is, African women will never fit into an agenda orchestrated by white women.

After yelling, speeches, performances, and walking around D.C. the crowd dispersed to go back to the safety of their white nation, not making a difference just being nasty women who want to be grabbed by the pussy.

Still no demands from March organizers

After the March, the website was updated to include 10 actions in 100 days; a way to contact local lawmakers, but there has yet to be a list of demands or petitions clearly stated.

African women know, however, that lawmakers are not the solution for the issues we are facing. Lawmakers weren’t the solution when Obama was president or any other president for that matter.

Our solution will come as a result of claiming space in the fight against the system that oppresses and exploits our people and this puts us in direct opposition to any strategy laid out by white women, whose main objective is to coax lawmakers into considering their contributions to white power.

We encourage African women who saw the contradictions of the March to join the African National Women’s Organization so that you can be armed with a theory that champions your own agenda.

Forward the interests of African women!
Down with white opportunism!