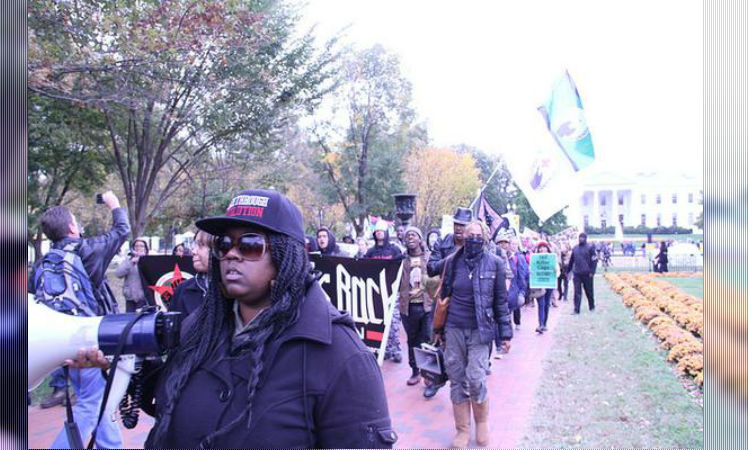 When Being a Single Mother and an Organizer Comes Under Attack

“The revolution starts at home”, as stated by my mother when she learned of my intentions to organize with the Uhuru Movement.

Essentially her thoughts were that I should not be out organizing in the streets. She thought I should be at home taking care of my children.

Quite often I become angered by the notion that women who are apart of a revolutionary organization, neglect their childcare responsibilities.

In reality, not adopting an active role in the revolution by ensuring liberation for our children could be considered as child neglect. My children are the center of my life; therefore, it is my duty to liberate my offspring from imperialism.

Because I am a revolutionary, my intentions are to secure my children’s future as well as the future of the African people everywhere.

It is easy to become discouraged by my mother’s sentiments; however, what we must understand is how colonialism has confused the minds of the masses to such a devastating degree.

Unfortunately, my mother along with other African people, live as colonial subjects within the global capitalist system.

Thus, a number of people exist in this world lacking a complete understanding of the fundamental contradictions responsible for creating the disastrous conditions forced upon our neighborhoods and entrapping our families. She, just as the masses, does not understand the full reach of colonialism. My job as a revolutionary is to help her understand.

When women make the decision to engage in work to liberate ourselves and our people, we take our specific situation out of the center.

We recognize that our condition, single motherhood, is not any more different than any other African woman who faces raising their children on their own.

We are no different than African women who dwell in the favelas of Brazil, who bear the burden of working as domestic workers just to put food on the table for their children.

And we are no different than the African women in Milwaukee who experience some of the highest infant mortality rates in the America.

Colonial domination exists as a direct obstruction to self -determination and control over our own resources.

By gaining a historical materialist understanding of the world around us, we will realize that our suffering is systemic. In order to improve our conditions we must adopt an objective solution. The solution must be to make a revolution.

Far too many African women in the world have been assigned the great responsibility and chore of raising children by ourselves that many do not even think of revolution as a solution.

We must see revolution as the answer to change the condition of single parenting, because revolution means creating a new world.

The way the world is today, we have to make decisions such as leaving our children in a hot car  to go on a job interview, because  we don’t have childcare. Without a job, one could become homeless. If you are homeless, a litany of additional problems arises. Revolution is very necessary.

Disruption in the African family unit

Our familial relationships have been directly impacted by colonialism. Where once we had an extended family to assist with raising the children, now, because of capitalism – which forces us to abandon our homes to look for jobs just to sustain ourselves -there is no one available who can help with this task.

Childcare is a precarious situation that leaves African women vulnerable to and dependent upon the system. We are constantly looking for someone/someplace that could fulfill the role of caregiver without divesting us of all the money we earn.

This is difficult, but a contradiction that has its roots in colonialism as W.O. Maloba points out in his book African Women in Revolution; “to facilitate the flow of African labor, the African family’s economic viability as a self-sufficient unit had to be thoroughly compromised.”

This deconstruction of the African family has been ingrained in Africans from the first time Europeans colonized and enslaved us 600 years ago.

The deconstruction continued with the welfare state, which bans men from living in the home. To the chemical warfare waged on the African community through drugs such as crack cocaine and now with the school to prison pipeline.

As a result our people feel like they have to take care of themselves. Especially the youth, who can’t see a future or see the future a bleak.

It is under these conditions that African women are forced to raise families, a reality that Maloba ties to the onset of colonialism in Africa when “women came to shoulder not only increased responsibilities but also to discharge those duties that in precolonial Africa would have been considered as belonging to men.

These women assumed the responsibility of ensuring the survival and the integrity of the family.”

The struggle for engagement

So the situation is just not specific to me, it is specific to the colonial oppressed African nation. Therefore when I engage in this struggle to educate and liberate, it can’t just be a personal struggle.

This struggle has to be one that addresses the contradiction for the entire African nation.

Through political education, the African working class will become informed and understand the urgency to unite for the purpose of overturning this capitalist system. We want self-determination and control of our resources.

We learned that it’s not enough to resist, we must organize. The rebellion in Ferguson was phenomenal because the people continue to rebel and resist colonial oppression.

The status quo march and rally was abandoned. They resisted fearlessly compelling the eyes of the world to surrender their attention to the cries of the oppressed Africans living in the so called land of the free.

Ferguson raised the consciousness of oppressed people worldwide. Yet, everyone’s consciousness being raised is not enough, it will not be enough. People must be organized in mass revolutionary struggle in order to overthrow this system.

The International People’s Democratic Uhuru Movement (InPDUM) was created in 1991 to fight for the democratic rights of the African working class.

The African People’s Socialist Party realized that not everyone is ready to join a political party when they are worried about day-to-day realities such as food, clothing, shelter, and housing. InPDUM was created to meet the African working class where they are, in the midst of the day-to-day struggle for survival.

Only through organized struggle can we overturn this parasitic system of imperialism and become a self-determined people. InPDUM is committed to spreading African Internationalism to the masses of African people in the U.S. by organizing everywhere to liberate the African community.

We are calling on Africans everywhere to join InPDUM and ANWO and help build the Uhuru Kijiji Childcare Collectives.