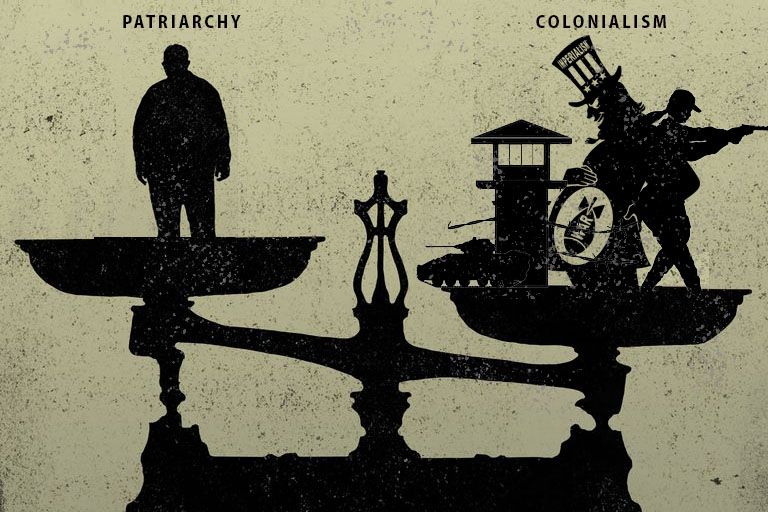 We would rather spend all of our time engaged in solving the problems of our class; organizing African women to combat colonialism, which threatens our participation in the African liberation struggle.

We are forced to, however, make critiques of the subjective petit bourgeois nature of feminism because it is a divisive, unproductive political line that leads African women away from African liberation and toward an unrealistic stance of self-preservation under white power imperialism.

ANWO is a confusing organization for many feminists and feminist leaning activists, because while we are in favor of equality of African women on one hand; we are against colonialism in all of its forms including in the form of petit bourgeois feminism which puts forth the position that patriarchy is the primary barrier for African women.

Patriarchy, as problematic as it may be, is not the core contradiction. It can be overturned with political education in the form of discussions and, from time to time, physical resistance.

Colonialism, on the other hand, cannot be reasoned with. Its very existence is at the expense of the lives and lands of many of the world’s peoples regardless of age, gender, political alignment, class or religion.

Therefore, ANWO understands that patriarchy is undesirable; as we continue to critique feminist conclusions that prioritize ending patriarchy over all other things, because we understand that an equal society cannot be achieved under the parasitic exploitative system of capitalist colonialism.

Only the African revolution can bring about an equal society

What we do instead is build toward a revolution. In that process of building a new socialist society where African workers have control of the State, we are challenged and transformed through criticism and self-criticism, dialectical materialism, combating liberalism, engaging in struggle and forwarding the leadership of African women, as a practice.

For example, it has African women fighting for equal pay for “women”, while oppressor nation women continue to earn more than African, Indigenous and Latinx men and women in the U.S.

Patriarchy cannot explain this dichotomy, nor can it explain the many other issues that affect poor working class colonized people.

Patriarchy does not explain the overrepresentation of the African prisoners in the U.S., Europe and Canada; State violence; the overrepresentation African children kidnapped by the State; dumpster babies; neocolonialism; infant and maternal death; poor healthcare; food deserts; gentrification; ethnic cleansing; and proxy wars.

Feminists are confused about privilege, patriarchy and oppression

The fact that feminism cannot explain the world confuses even feminists themselves. Feminism does not provide an analysis for oppression, colonialism or violence, even though violence seems to be the primary basis for the creation of a black feminist.

A self-identified feminist initiated a struggle with Party member, Dexter Mlimwengu, after he made a critique of Angela Davis on a social media post. What resulted was a stream of strawman arguments, used by feminists, to defend their position that African men benefit from white power.

The feminist tried to make a point about oppression, which lobbed all forms of internal colonized oppression on African men.

When Dexter presented her with the variations of violence that happen amongst the colonized giving the example of “cishet” African women “oppressing” queer African women, the feminist says, “we do, but in a power structure, it doesn’t do anything. Like a black person being “racist” to a white person.”

To which Dexter asked, “but if their “oppressing” doesn’t do anything then they are not really oppressing. So black women are incapable of oppressing but black men oppress black women?”

The reality is that oppressive violence is a symptom of colonialism. Colonized people engage in violence at much higher rates than if we were not colonized, because of the forced contained conditions that are in place to control us.

African men cannot therefore, benefit from white power when they are victims of it.

The feminist could not contend with this line of questioning and attempted to retreat from the discussion when the comrades deepened the question of African male privilege and oppression.

Confused about privilege, patriarchy and oppression

There is no such thing as African male privilege

Does male privilege then save us from getting gunned down by the pigs?

Does male privilege work when white women yell rape and the next thing you know, there’s a lynch mob at the door?

Does male privilege keep African men from being stuffed into prisons?

Perhaps it was male privilege that crushed the Black Revolution of the ‘60s too, right?

Where is my so-called male privilege to grant me power over judges, the police, the courts, the schools, the banks? How does one begin to organize to defeat “male privilege”, since this seems to be the fundamental issue?

Colonialism, imperialism, and parasitic capitalism be damned! It’s “male privilege” that snatches African women’s children away and places them in foster care.

It’s ‘male privilege’ that has distorted the relationships between African men and women – not centuries of oppression.

How do you define how you, a black woman, ended up in this country? Do you say that “male privilege” did that?

This “male privilege” that African men supposedly has didn’t come into effect when we were being stuffed on to those slave ships, same as African women.

To think that African women can achieve liberation separate of African men, you really have to ask how that will happen.

African men do and say horrible things to African women, and vice versa, not as a result of “male privilege” but because of this relationship we have with colonialism. When we identify our issue as “male privilege”, we place the onus on the oppressed versus the oppressor and doesn’t give us an opportunity to overturn it.

The feminist responded, “You see! That’s what black men do! You always make it about you! That’s what I’m talking about!”

This sister does not have a historical materialist understanding of the world and the place of Africans in it, such as what is explained in the theory of African Internationalism, therefore, she has come to the wrong conclusions about the whole question of patriarchy and privilege.

We can have ideological disagreements with sisters who have this understanding, but at the end of the day, we want every African woman to be educated about the root cause of our conditions and how to fight. We recognize barriers that are sometimes present in our communities and unite that they should be destroyed. We do not want to fight African men and discourage them acting as the State in our homes, communities or any other space, and we support dialogue and action that dismantle colonial behaviors that mimic the oppression of white power.

That’s why we are actively involved in dismantling these behaviors, like what we’ve done in Santa Barbara, California when we organize our community to respond to a campus predator.

We have also targeted our work at the primary purveyors of violence in our communities, the State. We have organize protests against slumlords that threatened eviction and social service offices that denied services – and won.

We’ve organized a community response to the state-sponsored kidnapping of African children from poor working class African families, with our campaign #ArrestCPS.

We are also engaged in building economic self-sustainability for our organization and our community through our brand DeColonaise and we provide political education through our website, flyers and The Burning Spear Newspaper’s column Harriet’s Daughter.