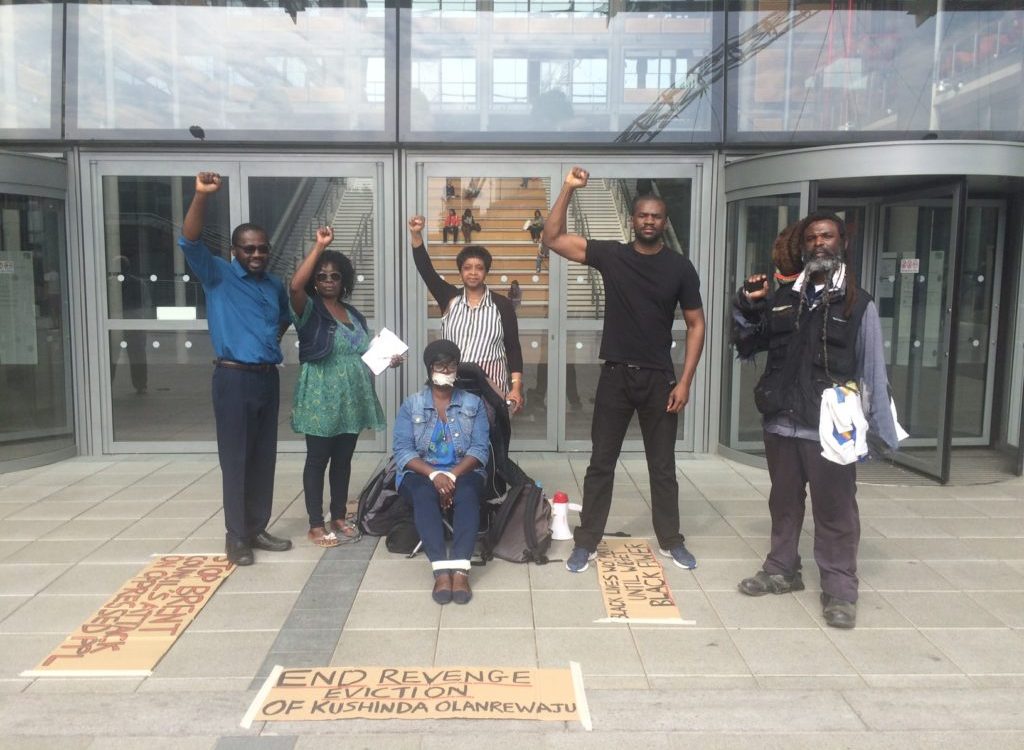 Up until August 2016,  Kushinda Olanrewaju, Vice President of the African National Women’s Organization (ANWO) had been under serious attack by the state in London’s borough of Brent. We aren’t talking about the type of attacks, that make national headlines or draw international outrage, but the types of attacks that debilitate colonized African women in cities throughout the world.

These attacks run the gamut of social and economic assaults, meant to demoralize and cause crisis; such as revenge evictions, stoppages of social benefits , unannounced police visits, impromptu court appearances, and illegitimate Council tax levies, among other things.

From the outside, all of this could appear to be a string of bad situations or could even be summed up as something that is a result of Kushinda’s poor management; but hundreds of pages of correspondence to and from Brent Council says otherwise.

Over the course of 17 years Kushinda has been in constant battle with the state after initially filing a complaint against the school district for the treatment of her learning disabled son, Meshach Boland who was 12 years old at the time.

First, they cancelled her income benefits without explanation, then they denied her carer benefits and so on and so forth until the present day.

But all along Kushinda has fought for clarity. She has been in the courts, gone down to their offices, written extensive appeals, emailed and protested only to be met with silence or additional attacks.

The State retaliates after push back against police

In August 2015, everything started to escalate for Kushinda after Brent police sent a targeted letter to families following a stabbing in the African community.

The letter demanded that African youth attend a meeting to discuss the stabbing and warned that if the youth did not attend the meeting, Brent Police would heighten its efforts in the community.

Knowing the implications for black youth and even Kushinda’s learning disabled son, Meshach who is now 29- years old, the Uhuru Movement responded to the letter by writing our own letter which exposed the colonial nature of the police – the letter was published in a local paper; which elevated the issue.

The Uhuru Movement began organizing the community and building a resistance to the policy of police containment.

Only a few months later, in January, Meshach was involved in an altercation with a store owner – a result of his denied access to treatment for his learning and behavioral disabilities – which resulted in a warrant for his arrest and attempted criminal prosecution.

The African National Women’s Organization responded with the First they Fail Us! Then they Jail Us! Campaign which organized a mass call-in to Crown Prosecution Services (CPS) and a protest – led by Kushinda – in front of the Willesden Magistrate court on May 11th, the date of Meshach’s hearing].

This resulted in the court pushing back their attempts to incarcerate Meshach. It was a short-lived victory.

Brent retaliated against Kushinda with tax levies and eviction proceeding among other things; which temporarily prevented her from organizing.

We saw her become more isolated and depressed as the state’s agencies collaborated with each other to strengthen their attacks.

First Brent said she owed taxes on a business that never belonged to her, then they sent an eviction notice, next they levied her with additional Council taxes that came up to over two thousand pounds. Then they attempted to move her ailing mother from her home, then they tried to move Meshach’s hearing to an earlier date.

Kushinda and ANWO couldn’t respond fast enough to everything so we decided to go on the offensive. We decided to bring Brent Council’s dirty laundry to their front steps by organizing a daily protest during the month of August, to be held in front of their headquarters at Brent Civic Centre.

There, Kushinda sat in front of their doors with her mouth taped and hands and feet bound surrounded by poster boards that read “Stop the Revenge Eviction of Kushinda Olanrenwaju”, “Black Lives Won’t Matter, Until we Get Black Power”, and “Stop Britain’s War on Oppressed People”. Everyday she was flanked by her sister Lorna and fellow comrade Antony, who served as agitators and security .

As soon as the protest started, Council representatives scurried to find a resolution so that they could move this “poor black woman” from in front of their shiny state-of-the-art building.

They came out to the street with her files in hand and tried to figure it out, right then and there. This was after Kushinda had been ignored for months. Within two weeks we had met with Council representatives and her eviction had been stopped.

We organized a committee who played pivotal roles in the demonstrations both locally and internationally. Nemequene Tundama and Awqa Colque, indigenous comrades who stand in opposition to colonialism and the oppression of African and indigenous people. We gathered support from Deepa Naik and her daughter Sunaya from This is Not a Gateway; Sister Steffney from London Campaign Against Police and State Violence (LCAPSV); and Sister Jacqui and Brother Cecil from the Pan African Community Society Forum (PACSF).

When we organize we win

By the end of the 20-day protest, we had collected 200 contacts, organized media coverage, recruited other African organizations and supporters to join the protest, held solidarity protests in Phoenix AZ and Washington D.C. and led a successful social media campaign with #DefendAfricanWomen.

We also saw CPS move to end their prosecution of Meshach and are currently working to throw out the case.

These are huge victories! However, we know that there is more to fight around Kushinda. Kushinda still does not have income or her carer benefits restored.

The Council does not want to consider their role in denying his access for 17 years. They want to start fresh in order to avoid the reparations they will have to give Meshach for the years of their neglect.

In the meeting we had with the council, in the first two weeks, the Adult Social Care Services Director, declared they did not have an Adult Social Care file on Meshach – which was a total lie since we have records.

So in response, on the last day of protest, we delivered a copy of the 515 page file to the Director of Operations for Adult Social Care – Ms. Helen Woodland.