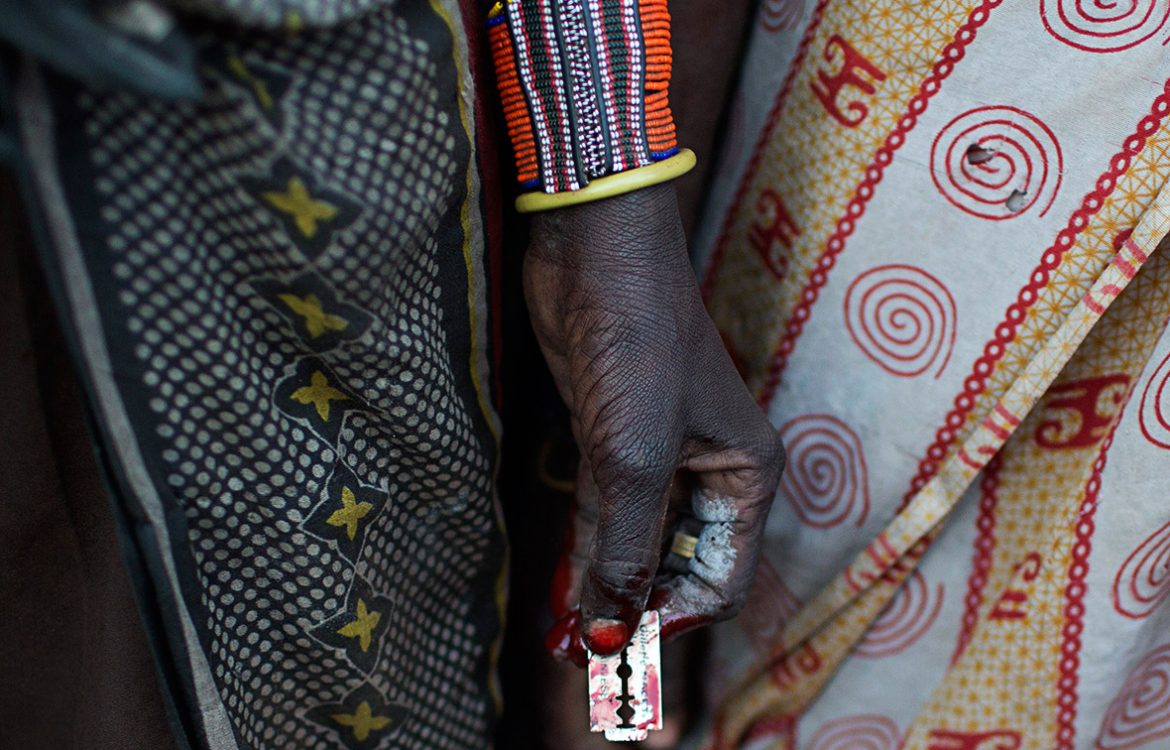 According to the World Heath Organization, there is an estimated 125 million girls and women throughout the world who have been subjected to a practice called female genital mutilation (FGM), a majority of whom lives in Africa and the Middle East.

FGM is the removing or altering of the external genitalia of girls and young women, which is a centuries-old practice that predates modern religion.

Supporters of this practice provide various reasons for maintaining it, often citing cultural traditions. Opponents of FGM provide a long list of medical and moral reasons why it should end.

Whatever the medical or cultural reasons given for or against FGM, the African National Women’s Organization (ANWO) is clear that, at its core, female genital mutilation further limits the freedom of African women and girls who are already suffering under colonial domination.

Therefore, we unite with the African People’s Socialist Party’s position to end the mutilation of women that reads:

“African women also find themselves locked into backward social practices that have assumed the weight of culture. Genital mutilation is one of the most obvious of such practices.

“While there is a debate on whether this practice was introduced into Africa by Arabs or other external forces, the fact remains that genital mutilation is a brutal method used in attempt to guarantee male inheritance rights by limiting the sexual freedom of women.”

The most severe form of female genital mutilation removes the clitoris and labia, and sews closed the vaginal opening. This ensures that girls stay virgins before marriage and loyal to a husband after marriage.

The vagina is cut opened only for marital intercourse and may even be sewn up again and repeated several times to prevent the woman from having intercourse with anyone else.

It is a violent, nasty, backward practice that needs to be stamped out completely. It still continues today, however, because of colonial exploitation.

It is not surprising then, that FGM is mostly practiced in places where parasitic capitalist exploitation and colonial oppression has ravaged the population––mostly in Africa and places in the Middle East.

By stealing the labor and resources of the colonized, the people are prevented from moving away from outdated traditions that make little sense.

We are forced to stay ignorant and steeped in mysticism when medical proof exists that can debunk many of the reasons given for continuing the practice––namely that cutting contributes to good health.

While the exploiters use science and technology to remove minerals by the tons, many of our people don’t have access to the information that can show that the labia protects the vagina.

But, more than just a question of “cleanliness” and guaranteeing male inheritance, the genital mutilation of African girls reaches far beyond the girl and the man she is forced to marry.

Female genital mutilation is a lucrative business for many practitioners whose ability to support themselves and their families depends on performing this heinous act.

It is also a way of securing financial security for the girl and her family, since a girl who has undergone the “cutting” brings a higher bride price.

Because many populations have few economic options, the barter and trade of a woman’s sex is the economic center of entire communities.

Under capitalism, women are considered currency.

Whether exploited as “sex workers” or because of culture, the value of women, especially colonized and African women, becomes liquid.

We are traded for goods, services, sex, food, money and anything else you can imagine.

FGM, however, cannot be fixed in a bubble. It is just one symptom of colonialism.

In order to end FGM entirely, we have to make a struggle to destroy colonial domination.

Colonialism is a brutal and terroristic system used by imperialism to oppress much of the world’s people.

Since Europe’s attack on Africa, millions of Africans have been displaced, killed and maimed in Europe’s hunt for labor, land and resources.

For example, in the 23 years (1885-1908) Leopold II [of Belgium] ruled the Congo, he massacred 10 million Africans by cutting off their hands and genitals, flogging them to death, starving them into forced labor, holding children ransom and burning villages.

In the territories known as the Americas and Canada, the native populations were nearly wiped out when white settlers’ thirst for land and resources led them to murder, kidnap and rape Indigenous and African people.

Today, imperialism demands the necessity of colonialism to sustain itself in countries throughout the world.

Therefore, the violence of FGM, as sickening as it is, is miniscule compared to the overall violence of colonial crusades of occupation.

This does not mean we shouldn’t challenge it. We should.

However, we must also understand it within the context and the subsequent struggle against colonialism as a strategy to end the oppressive practice.

Socialism is key to eradicating FGM

Not only should we end colonialism by destroying capitalism, we have to replace capitalism with socialism to ensure the forward progression of society.

Socialism is when the workers control the State and own the means of production.

That way there can be an assurance of a redistribution of wealth, which contributes to a more equal society.

It is an opposite system to that of capitalism, which exploits much of the world’s people.

Under socialism, women and men will be jolted out of the fog of mysticism and economic depravity and driven toward a future that will require the rapid development of the people.

Practices that had previously been the only source of economic stability will fade away as society is opened up to new opportunities.

Worker-owned production will ensure that both women and men can make a living contributing to the development of our nation.

A worker-controlled State will implement policies that restrict backward practices that harm sectors of the population.

One of the best examples of what a socialist, anti-colonial government can do to stamp out oppressive practices toward women, is that of Thomas Sankara.

Sankara was the Communist President of Burkina Faso from 1983 until colonial agents killed him in 1987.

His government railed against the oppression of women, outlawing genital mutilation of girls and women, polygamy, forced marriages and elevated women to leadership positions.

After his murder and the neocolonial takeover of Burkina Faso, policies restricting FGM where all but forgotten until it was outlawed again in 1996. There is little evidence, however, to show that the new restriction has stopped the practice.

Nearly 71 percent of women and girls in Burkino Faso are victims of FGM, according to a 2008 UNICEF report.

Compare Sankara’s policies to nationalist leaders who positioned themselves as anti-colonialist and black nationalists but have not taken on a socialist agenda.

Their only interest is to replace the white oppressors with themselves and maintain many of the same policies of oppression.

Some nationalists have historically supported the continuation of FGM in response to what was considered an attack on African traditions by European colonizers.

In 1938 he wrote in Facing Mount Kenya: “No proper Kikuyu would dream of marrying a girl who has not been circumcised—this operation is regarded as a conditio sine qua non for the whole teaching of tribal law, religion and morality.”

Rooted in tribalism, this statement can only be described as counter-revolutionary.

That is why we say that freedom for all women means making a revolution.

At our 2015 founding conferences in Washington D.C and London, UK, the African National Women’s Organization united on a resolution to develop political education campaigns to eradicate the prevalence of female genital mutilation in our communities.

We continue to uphold the resolution and aim to do more around the issue.

We will do all that it takes to ensure that we clear the fog, as we actively participate in various struggles that contribute the destruction of capitalism.