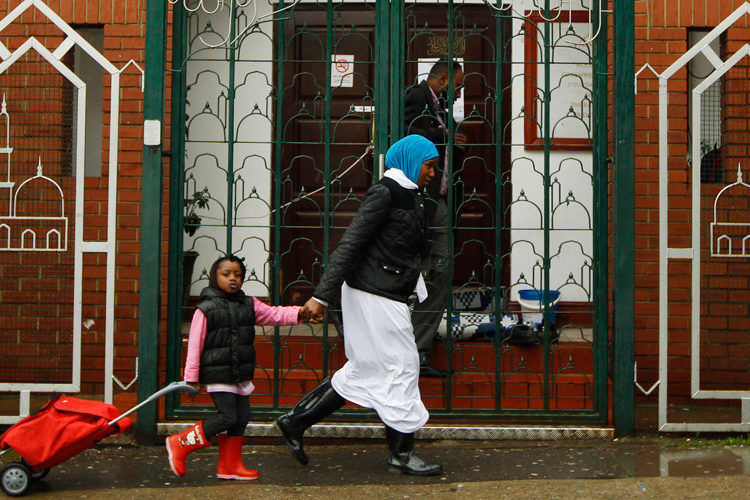 Editor’s Note: Our use of “African” is inclusive of all black people regardless of where we were born.

It is important for us to note this for UK readers as there is continued efforts to further segregate African people by using terms like “Black Caribbean,” “Black African,” “Black British” and “Black Other.”

Our efforts to dig up statistics about income inequality in the UK returned results based on these identities, which varied only slightly, but still confirmed that overall, African people as a whole are suffering the same effects of colonialism.

As African Internationalists, we reject this and all other efforts to separate African people based on colonially-imposed borders.

Previously, families who claimed state welfare benefits would receive the extra benefits for each subsequent child added to the family.

In the UK, 24 percent of African families have more than two children, compared to 8 percent of white households.

This means that African families that have already been struggling to make ends meet have been driven into an economic tailspin, while white families remain relatively unaffected.

The ‘Runnymede Trust,’ an independent “race equality think tank,” highlighted that millions of Africans will be disparately affected by the government’s austerity measures and the ‘Women’s Budget Group’ indicates that mostly women will bear the impact of these harsh policies.

These analyses predict African women [and children] are set to experience serious acute problems in years to come.

Parasitic capitalism, the current social system is experiencing a catastrophic economic crisis as a consequence of the oppressed peoples of the world struggling for national liberation over their lives, land and destiny.

In a desperate bid to restore trust in its declining parasitic capitalist system, the United Kingdom has done everything it can to persuade its citizens, that things are improving.

But the UK government is unable to explain away its mounting unemployment rate, declining monetary units, rise in violence, and other ills.

Instead, the UK government lay the blame on colonized African and other colonized immigrant/migrant communities, making this the focal point for the Brexit referendum debates of all the major political parties.

It is no coincidence that the decision to cut welfare programs came just a few months before UK started negotiations to leave the European Union.

The African National Women’s Organization (ANWO) London is clear that the UK government’s decision to execute this military-like economic strategy is meant to drive African women-led households further into crises so they can keep us fighting for the basic right to live, while they continue to deepen their exploitation.

Welfare dependency is a colonial strategy

Colonialism has immobilized and demoralized African women and trapped us in the vicious cycle of the welfare benefits system, regardless of whether we are unemployed or employed.

While Africans constitute only three percent of UK’s population, we have the highest unemployment rate at 13 percent, according to the Institute of Race Relations.

African women, having already been scraping by on welfare benefits, are now forcibly deprived of resources to maintain an acceptable standard of living.

Although a small collection of African women are level to level with European women, in some of the professional fields of work, their gains have had no real bearings on the position of poor working class African women, who consistently have a chronically high unemployment rate wherever we are in the world.

Even when employed, the vast majority of us are restricted to the most menial of work with the lowest pay and poorest working conditions.

The crushing daily burden of our experiences often leaves us with soul wrenching choices of having to choose between food and rent. Either way we lose.

Contrary to accusations of sapping up Britain’s resources, African women have historically been the producers of its wealth.

Throughout our 600 years of forced labor, we have built, reinforced and sustained this country.

On the other hand, European women ,who sit on the pedestal of European wealth are relatively new to the labor force.

UK is the parasite, not African people

Europe was dismal place prior to its attack on Africa, which initiated the large-scale kidnapping and displacement of African people.

Contrary to the heroic stories told in schools about Christopher Columbus’ explorations, the primary motivation for him going out into a “flat” world was initiated by Europe’s crisis.

Europe had no resources and was in the midst of the worst plague [black plague] in human history. which killed more than half of all white people on Earth.

His expedition was the result of a desperate attempt by the European bourgeoisie, to save themselves.

In the hundreds of years following Columbus’ campaigns, millions of African and Indigenous people were slaughtered or enslaved and their land and resources stolen.

As Britain realized that it could not sustain itself without the loot and labor from Africa, the theft became more and more sophisticated, moving away from direct colonial rule to neocolonialism (white power in black face).

The slaves were made into citizens of the crown and their labor was used for the benefit of the crown. only.

British companies such as Unilever, Lloyds of London, HSBC and BP made millions from slavery and colonialism and are still sustained by poor working class Africans until this day.

So you see, poor working class African families in UK are not the parasite.

We are here because we are chasing the resources that were stolen from us.

It is the UK who is the parasite and dependent on the welfare of African labor, land, and resources.

The economic and physical violence of parasitic capitalism

Under imperialist rule, African women were never held in high regard.

As part of the colonized oppressed African masses, African women were forced, through slavery, into grueling, backbreaking work from sunrise to sunset.

We were beaten mercilessly and bred like animals only to have our children ripped from our arms and sold to the highest bidder.

The end of chattel slavery, as an economic institution, made way for direct colonialism.

Africans were steered into the position of the “reserve army of labor” herded in and out of the workforce based on the immediate needs of the imperialist capitalist economy and gotten rid of when not needed.

Following the imperialist second world war, Britain was unable to find the millions of willing British workers it needed to rebuild the country.

Ravenous for a cheap pool of labor to reach its national objectives, Britain in 1948  implemented special measures that included a call to Africans in its colonies. At the time, the British colonies of the Caribbean were underdeveloped  which unleashed a series of rebellions across the islands.

Thousands of colonized Africans from the Caribbean escaped the dreadful conditions on the islands and were hired to work in Britain’s transport system, postal service, and hospitals.

Around 40,000 nurses and midwives from Britain’s colonies, responded.

Many of these were African women, teenagers and young adult women who left their children behind in the hope their work would provide for their families back home.

Prior to Europe’s assault on Africa and African people, we were a self-governing people.

We maintained perfectly sound social systems with great civilizations where women could have any number of children she so chose.

The women of the African National Women’s Organization are not content with this current reality and struggle like hell to help other African women to fight against these conditions.

African people are a nation of oppressed people who are dominated and exploited by imperialist power for our resources upon which Europe and North America survives.

Colonialism has disempowered, impoverished and marginalized African women in such a deep and profound way that African women MUST lead in the struggle to regain our freedom and a life of dignity.

Join ANWO and build local branches wherever we live, so we can actively and collectively deal with every major issue that affects our daily lives.

We MUST lead our way out of the imperialist maze of miseries.