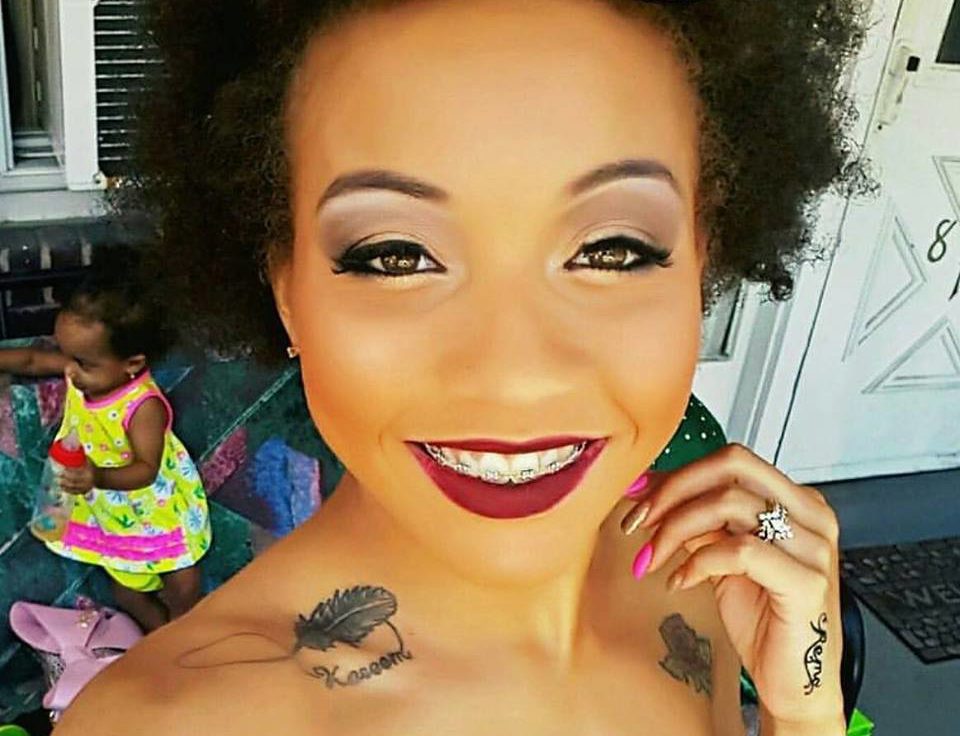 Let’s first get this out of the way, Korryn Gaines was a fearless, powerful, warrior who died resisting colonial oppression. Korryn, a 23-year-old African mother of two children, was murdered on Monday August 1, 2016, by Baltimore County S.W.A.T team executing a warrant for unpaid traffic citations.  She was inside her home with her 5-year-old son when S.W.A.T ended their hours-long standoff  by firing on her. According to their reports, Korryn shot back but did not hit anyone. The police then fired multiple times into her home, killing Korryn and wounding her son – he survived.

After the murder, videos surfaced showing the last moments of her life – a talk she had with her son and the fully armed cop in her doorway pointing a gun at her. Other videos from her social media accounts surfaced as well, showing Korryn reciting spoken word poetry about state oppression, one where she is loading a gun, and a video of a traffic stop which happened just months before her death.

In the 20-minute long video of the traffic stop, Korryn is stopped by police because her car did not have Maryland state-issued license plates.  After refusing to identify herself until the cop identified himself, Korryn explained that the police removed her plates in retaliation for her lawsuit against Eastern Correctional Institution (ECI), however, her car’s insurance and registration were paid for and up to date, so there was no crime committed.

The cop then informed her that he would issue a citation – which Korryn flatly said she would not pay – and that they would be towing her car – to which Korryn said, “you’re not going to steal my car…there is no crime here.”   She understood that the police created the conditions for which she had been stopped and that they are an occupying army in the black community.

For the rest of the video, in between exchanging words with the cops, Korryn instructs her son to fight the police if they try to take him. She tells him to hold the phone and video all interactions when the police tries to fight her. She tells the cop, “if you put your hands on me I promise you, you will have to murder me”, she demanded her car keys back, and she demanded to be left alone.

With every breath that came from Korryn, she exuded resistance to a system that continues to kill black people with impunity. She understood that in almost all circumstances where African people try to assert our rights, we are brutalized or murdered.   We saw this, most recently with the murders of Alton Sterling and Philando Castile, killed by police in Louisiana and Minnesota – a day apart from one another.

Unlike the murders of those two brothers, however, which incited protest from almost every sector of the community, Korryn’s resistance was stained by the fact that she was a resistant African woman and mother who taught her children to fight.

There is no mass protest and little admiration for her sacrifice. Instead, she is condemned for her non-compliant, mouthy behavior and unwillingness to compromise with a known enemy of African people – the colonial state.

Because she chose to resist, she has been called crazy, unstable, stupid, a bad mother and blamed for her  own death. This is a strategy to dismiss the righteous struggles of African women who are fighting their way out of colonial conditions.

When the police killed Alton Sterling after he refused to let two cops move him from a place he had permission to be, there was no public discussion about his need to comply.

When Philando Castile, chose to legally carry a firearm while in the presence of his child – no one called him a bad parent.

But when Sandra Bland shouted at a cop for his oppressive behavior, folks blamed her for being arrested. They said she should not have protested her treatment.

We understand that  being under colonial domination for the last 500 years contributes to backwards ideals that devalues and dismisses African women.

As African women and mothers, we are told that to resist, to participate in liberation struggles, makes us crazy. While it’s o.k. for African men to stand their ground when they are wronged, African women are encouraged to just let the state do what it wants to us.

When African women challenge the state-funded kidnapping of their children, as is the case with the African National Women (ANWO)’s #ArrestDHS campaign, where women are pressured to comply with all sorts of the ludicrous requirements that child welfare agencies put as a barrier to get their children back; they are labeled bad parents, crazy, and criminals – usually without any outrage from the African community.

When a Kushinda Olanrewaju, Vice President of ANWO and mother, refuses to let the state carry out all sorts of illegitimate charges against her and her family, she is assumed guilty and labeled paranoid.

When parents organize together to educate their children, independent of public school, as is the case with ANWO’s Uhuru Kijiji Childcare Collective, they are called separatist and are targeted for all sorts of interventions by the State.

When we say that African women are “specially” oppressed, we understand the nature of the state as an enemy of African people, but we also understand the many ways in which Africans work to deepen contradictions that exist for African women, which make us especially open to state attacks and without support.

This isolates African women so that our backs are up against the wall. Some of us are led into the clutches of feminism because it appears to challenge oppression. In reality, though, all feminism does is organize against patriarchy, which it identifies as the main contradiction -when it isn’t.

Colonialism, which results in African people not having power over our own lives, is the primary cause of African women’s oppression.

Under capitalism, a parasitic world-wide economic system that came into existence as result of the European attack on Africa and African people which generated wealth for the entire white world,  African people were turned into currency  and African women continue to be used as currency.

Our very existence is rooted in the capitalist means of production – the production of people, the maintenance of society, and being workers ourselves; therefore, by resisting the colonial conditions erected by capitalism, we are striking a blow against imperialism itself.

Korryn Gaines, was a deathblow to colonialism, just like Micah Xavier Johnson and Gavin Long were.  She and other women like her are significant to the oppressed African masses who are beaten down every day by this system.

Korryn was determined not to be anyone’s slave. She was determined to fight; to be an example for her young son and daughter who bore witness to their own mother’s commitment to freedom.  We don’t care if she allegedly had a gun, we don’t care if shot back – which is a natural reaction when someone is shooting at you.  We unite with her choice to be confrontational, non-compliant, and resistant.

She is a clear example of the revolutionary capacity of  African women who put it on the line to be free.

She is Harriet Tubman. She is Nanny. She is Queen Nzinga.  She is Assata.   She was an African woman committed to being free and ensuring that her children had a taste of that freedom.

You will live on in the struggle for African freedom!