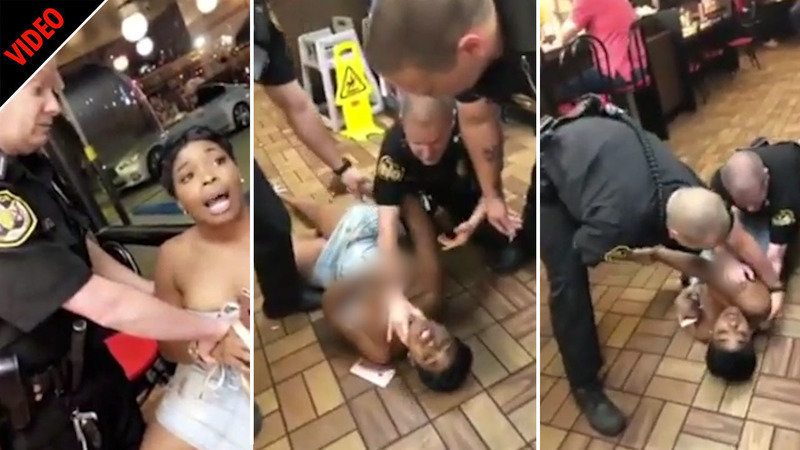 Following this past April, a viral video of the brutal assault of an African woman flooded the internet, displaying the sexually connotative attack by three white male officers violently grabbing twenty-five-year-old Chikesia Clemons and aggressively forcing her to the ground where they proceeded to straddle her and expose her breast while attempting to detain her. The use of aggressive force was expressed in the video as the cop blatantly stated that he was “about to break your arm” after Chikesia asked what he was doing to her.

The widely circulated video was recorded by Chikesia’s friend Canita Adams, she witnessed the entire attack and stood in Chikesia’s defense against the vicious police. It was stated by a Waffle House spokesman that prior to the attack, there was an altercation between white Waitresses and Chikesia and her friends, thus justifying the call for police.

It was captured on the establishment’s surveillance camera that Chikesia and Canita Adams did indeed engage in this altercation after having been told to pay for plastic utensils that Chikesia requested from those employees. It was stated by both Canita Adams and Chikesia Clemons that the white women employees were very rude when first addressing them and throughout their stay continued to provoke them. After having been told to pay for the plastic utensils, Chikesia Clemons told the employee that she wasn’t familiar with any establishment requiring payment for plastic utensils.

She further requested for the district manager’s card so she could file a complaint on one of the waitresses. As Chikesia waited for the number, these white women instead called the police on both of the African women.

The vile molestation committed against Chikesia by the state officers is nothing new to the horrifying experience African women have historically faced by this colonialist State.

Our circumstance as a colonized African people results in a lack of power over our black lives; let alone our own black bodies, which are brutalized and abused in every way possible by the State.

African women’s bodies have been manipulated as a tool by the colonialist state and the colonial white population to further prove our lack of power and reinforce its grotesque imperialist force.

African women continue to be sexually assaulted by colonial cops in many more scenarios.

Daniel Holtzclaw was a police officer in Oklahoma City, who was convicted for targeting  poor and working class African women within their communities with the motive to rape and sexually assault them between 2013 and 2014.

There was also the recent case of Sherita Dixon-Cole, an African woman in Waxahachie, Texas who was raped by a cop after rejecting his request for sex in exchange for her release in detainment.

While African women continue to endure this colonial attack of sexual assault, white women remain quiet and align with the State, as they too are the oppressors of African people.

Just as it was showcased in the video at the Waffle House, it was white women who called the cops on the African women and as Chikesia was being molested, the white women sat aside and watched, thus proving their true stance as the oppressor alongside white men who committed the sexual assault.

This is why the African National Women’s Organization says there’s no such thing as “women in general”.

There are in fact women of the oppressor nation who live at the expense of oppressed women and owe reparations to women of oppressed nations.

The false narrative of “unifying all women” under feminism and against the fight of patriarchy is a hindrance to the fight for freedom of the African nation.

Focusing on the critical realities of African women to be a result of patriarchy, instead of addressing the historical political basis of colonialism, the violent assault on Africa and theft of African people by Europeans, is a waste of time.

The African National Women’s Organization lifts up the resistance of African women.

We have been organizing since 2015 to bring African women into the African liberation fight that will free us from the shackles of colonial bondage.

We lift up the political theory of African Internationalism that puts revolutionary practical science into the hands of poor and working class Africans!

We unite with the Black is Back Coalition’s demand for Black Community Control of the Police!