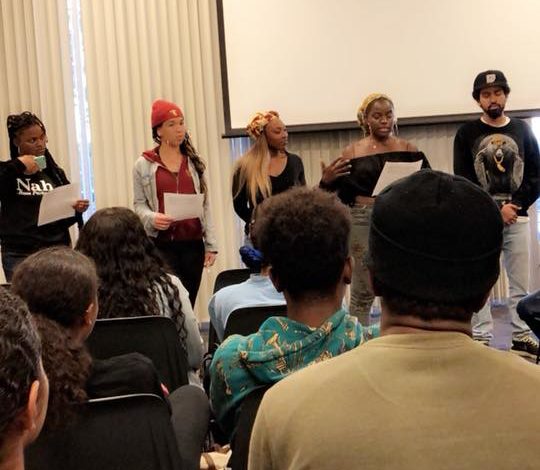 SANTA BARBARA, CA – We are addressing this letter to the black students at UC Santa Barbara, because we have been confronted with an issue that threatens our community.

We are members of the African National Women’s Organization (ANWO), an international organization founded in 2015 as a strategy of the African People’s Socialist Party to address the special oppression that black women face under colonialism.

The colonized  never benefit under colonialism and often experience various contradictions due to this parasitic relationship – the colonizer living off the colonized.

ANWO organizes with the understanding that colonialism is not of the past but, today, represents itself in the lives of African people all over the world. In the U.S., colonialism has been identified as U.S. domestic colonialism, which explains the tanks in the streets of Ferguson, mass incarceration of black people, gentrification of poor black communities, and the murders of black people every 28 hours.

We believe that in order for African people and specifically African women to break the parasitic relationship with our historic colonial oppressors(white people)  we have to organize for leadership and participation in the overall struggle for African freedom.

However, when our attention should be directed toward fighting against colonial oppression – white power – we are forced to confront the effects of colonialism inside the black community, in the form of sexual violence.

Dozens of black women on campus have named a black male athlete   in several acts of sexual  violence, including rape. The parties that he throws are often the scene of many of these violations.  These women have been afraid of stepping forward for fear of being alienated, maligned and dubbed as liars by our community.  We have heard their stories and are of the opinion that they are telling the truth.

We have sat down with our fellow  brother to get him to understand the severity of his behavior, yet he responded with arrogance and intimidation.  He accused us of targeting him because he is a popular black man on campus which is false. He accused us of retaliation, because of his choice to date white girls. That’s not true.

We are exposing him now because his behavior is harmful to half the population of black people on campus (black women, especially) and we want/need him to stop. That is our only motivation.

We do not take lightly the position that we have been put in, to accuse a black man of rape. Historically it has been our brothers, fathers, uncles who have been hung, burned,  and castrated  by the white power state and white vigilantes as a result of false allegations.  Therefore, we have no interest, in participating in the false accusation of a black man; despite his claim that we are targeting him because of jealousy and because he is a black man.

We say this while recognizing that the sexual violation of black women is part of the same history that often gets written off as a horrible thing of the past, when in fact these acts of violence continue from outside and within colonized African communities.

We find it disgusting that we have to take on THIS issue, on a majority white campus, where the basis of power rest in the hands of white people;instead of challenging the white power structure itself.

But we will take it on, because it is a barrier that must be destroyed, if we ever hope to have a  world free from oppression in all forms.

When we interact with black men, we have expectations of safety and respect. We expect black men to be just as cognizant about the trauma of sexual violence and objectification that black women have inherited as result of our enslavement and colonization, just as we as black women are aware and knowledgeable of the history of lynching and police murders that happen to black men, predominantly.

However when we’ve spoken to a few black men about this issue, we see reluctance to stand with us, because that would mean not attending the “only black parties on campus”. We have to really convince them that this is a problem.  It trivializes the very violent acts that have been committed against us and more specifically, furthermore it traumatizes the  women who have been victimized by this man.

We just find it outrageous that someone would try to rationalize supporting a predator just because he throws “good” parties.

We are your sisters, your community and will always stand in your defense.  We just ask for the same in return. Stand with us. Participate in discussions and actions  that will contribute to eliminating harmful behaviors.

We plan to convene forums on this issue and will continue to help this brother  and  other African men to stop his harmful behavior. But if he does not, we will make it very uncomfortable for him on campus.