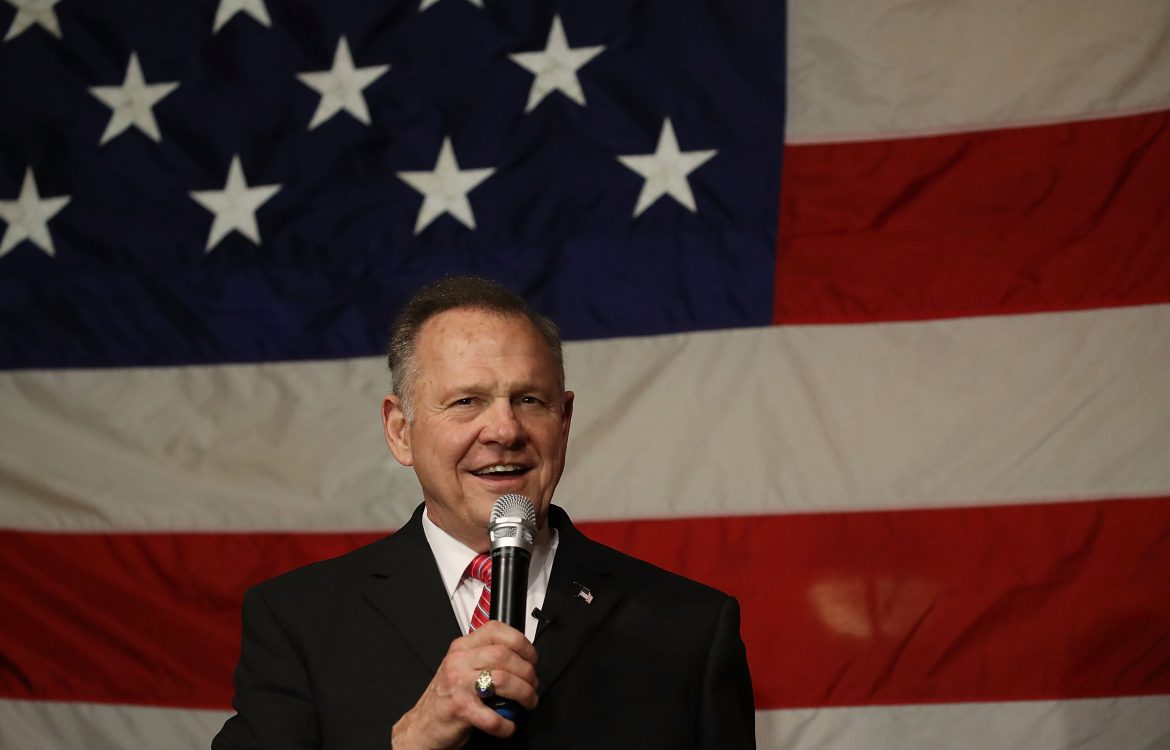 In recent months, bourgeois media has been dominated by stories of powerful capitalist, accused of sexual assault.

Harvey Weinstein, millionaire Hollywood film producer and Roy Moore, an American politician noted for his anti-homosexual, anti-Muslim, Christian, white nationalist views; have been at the top of the news as the most egregious of the 40 other men who have been also accused of sexual assault.

Both Weinstein and Moore have been accused of rape and sexual assault by at least a dozen women.

What sets Moore apart from Weinstein and the rest of the pack, however, is his affinity for young girls while holding a political office.

Apparently vagina grabbing isn’t something reserved for Donald Trump. It has been entrenched in American politics since the beginning.

Sexual violence, within U.S. politics, is as an American as apple pie. Without the forced mating and rapes of African women and girls, capitalism, would not exist.

Roy Moore is a capitalist colonialist’s dream. He graduated from West Point, served as a military police during Vietnam War; attained a law degree, was appointed as a circuit court judge, elected as Chief Justice of the Supreme Court of Alabama, and was the Republican nominee for U.S. Senate.

He did all of this while preying on young women. He actually married someone who he first became attracted to when she was 14 and he was 28.

Although, Moore admits that he has “approached and dated teenagers”, he considers it consensual.

He has been doing this for decades, yet it wasn’t until he was nominated for a Senate seat did his behaviors become too problematic for the bourgeoisie. The sexual assault accusations, no doubt surfacing now, as a strategy of the bourgeois Democratic Party to control the Senate.

The emergence of the social media #MeToo movement, started by African woman, Tarana Burke, and co-opted by white woman, Alyssa Milano; started the sexual assault outcry which led to dozens of political figures being outed.

What it has become, however, is a platform for mainly bourgeois white women to voice their own victimization by the likes of Weinstein, Moore and many other entertainment and political figures.

White women continue to show up to ensure the American colonial democracy continues at the expense of African and other colonized people. They overwhelmingly vote for the victimizers and and strategize to sway votes in their favor.

We’ve seen this in the Alabama Senate seat outcome, when 63 percent of white women voted for Moore and 98 percent of black women voted for his opponent, in a reactionary attempt to stop Moore, in the December 12th election.  No matter the outcome, imperialism still wins.

U.S. imperialism has turned a blind eye to the capitalist legacy of rape and sexual assault that was built on the wombs of young black girls.

Before there was a Roy Moore there were countless other U.S. political figures who were infamous for sexual violence. The only difference is that the victims were enslaved black women and girls whose assault became consensual “love stories” and their offspring “love children.”

Thomas Jefferson, for example, who is the author of the American Declaration of Independence, is a beloved figure in American politics. We are taught about him in U.S. colonial school system as a man of the utmost integrity and moral compass. He helped lay the foundation for the American experiment.

He was also a slaveholder, owning over 600 African human beings.

It has been proven that he raped, at least, one of his slaves, Sally Hemings; fathering all of her children. Sally, herself, was the product of rape. Her mother, Betty Hemings, an enslaved woman, was also a product of rape.

There are many attempts to whitewash these rapes, turning them into consensual relationships; but under slavery, the slave is not in a position to consent.

African women have been longstanding victims of colonial rape and forced conception, since Africa was first attacked. So much so that the rapes have changed the face of the African nation.

Sally, her mother and her mother’s mother were not mistresses, they were victims and they were also capital. The African woman’s womb was money, reproducing wealth for the white settler colonizers.

African women and our children could be traded for goods or services and sold, at any time. Even the children of slaveholders. African children were oftentimes held as interest and given as gifts.

In the book American Slave Coasts: A History of the Slave-Breeding Industry by Constance and Ned Sublette, the authors document a scene where a baby was given away on the road as told by an enslaved African man:

“Soon after we left St. Charles, the young child grew very cross, and kept up a noise during the greater part of the day. Mr. Walker complained of the child’s crying several times and told the mother to stop the child’s damned noise, or he would.”

“The woman tried to keep the child from crying, but could no. We put up at night with an acquaintance of Mr. Walker, and in the morning just as we were about the start, the child again commenced crying.”

“Walker stepped up to her and told her to give the child to him. The mother trembling obeyed. He took the child by one arm, as you would a cat by the leg, walked in the house and said to the lady, ‘Madam I will make you a present of this little nigger; it keeps such a noise that I can’t bear it.’”

The white lady accepted the child.

Sally was herself an inheritance to 26 -year-old Martha Jefferson, coming to the Jefferson household as a baby.

Just like in the case of Roy Moore, 14-years-old is recorded as the age of consent.

Although, Jefferson’s actions are disgusting, Martha is equally disgusting. She willingly accepted her own sister as a slave and likely turned a blind eye to Sally’s assault and the assault of Sally’s mother, by her own father.

Only when it is to white women’s political advantage, is the victimization of African and other colonized women used as a prop to bolster their own objectives.

White women cannot claim #MeToo when they were beneficiaries of human capital and we produced their wealth.

Thomas Jefferson is just one example of an American colonizing pedophile. There were other political figures who owned and participated in the sexual violation of hundreds of African people.

Slavery was such a part of the economy that the U.S. capital was moved from New York, to Philadelphia, to the legal slave “state” of Washington D.C., to better ensure political control of the nation’s primary capital, African slaves.

D.C. was a strategic location between Maryland and Virginia. These two states were the center of the domestic slave trade; after Jefferson signed legislation ending the importation of African slaves (the cheaper stock). Although Jefferson framed his position as a humanitarian effort, the slaveholder’s real motivation was to protect his own capitalist interest.

American born Africans were more expensive because they were bred to be slaves as opposed to newly kidnapped Africans from the Continent and “nobody in Chesapeake politics wanted more Africans coming in a devaluing their most significant assets. ” (Sublette, 15)

African women endured deepened sexual terror during this time, in order to meet demand for more slave labor. This terror didn’t end with the end of American slavery. African women continued to be violated by any white man with an itch.

From Recy Taylor a mother and wife, who was kidnapped and gang raped by 6 white men in 1944, sparking the Movement in Defense of Black Womanhood to Megan Williams who was kidnapped, raped and tortured by white women and men in West Virginia in 2007; the sexual violation of black women and girls never garnered the rallying cry of any of the bourgeois women’s activism. Especially if white women couldn’t “capitalize” from it.

In fact, black women have often been depicted as liars or worse, complicit in our own assaults.

The white women who are today helping their white counterparts win local and national political victories, feign ignorance about the long standing culture of rape and violence inherent in this parasitic social system, founded on rape and violence.

Make no mistake that black women and girls bodies are once again being violated by the American political system and the bourgeois political parties fight for control of the State.

African women will not be used as cannon fodder

African women are done being manipulated by bourgeois politics. That is why we are building toward the 1st Annual International Convention of the African National Women’s Organization (ANWO), that will be held in Washington, D.C. during Women’s History Month 2018.

The location and month are important for African women because both were established at our expense. This convention will provide analysis and better prepare African women to combat the efforts of imperialist white power to co-opt our struggle for freedom and liberation.

Men can also attend. It takes the nation. To learn more about the convention contact ANWO at info@anwouhuru.org or call (240) 326-3959.