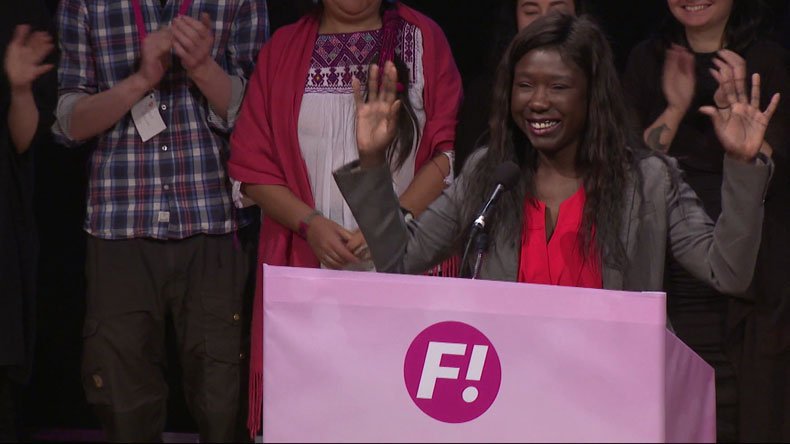 Building ANWO in Sweden Amidst the Contradiction of Swedish Feminism

Editor’s note:  This article represents only one portion of the many contradictions that face African women in Sweden.  In 2012 the Swedish Minister of Culture (a white woman) cut into a cake  made to look like a black mammy character, as if she was performing Female Genital Mutilation.  This happened in a country that brags about being the first feminist government in the world, yet and still African women face colonial contradictions that cannot be remedied with a feminist agenda.  The author, Makda Yohannes, helps break down these glaring contradictions from the viewpoint of being a reformed feminist turned African Internationalist.  ANWO has taken on this very issue and have organized internationally to help African women understand how to build for liberation by destroying white power imperialism.  We encourage everyone reading this to attend our first international convention in March of 2018 in Washington, DC, to learn, grow and contribute toward building the revolutionary capacity of African women.

SWEDEN — In March of this year, Feminist Initiativ (F!) chose an African woman, Victoria Kawesa who is originally from Uganda, as the Chair of their political party. This is the first time in Swedish history that a black woman has ever been elected to such a high position in the imperialist political sphere.

Feminist Initiativ, is a feminist political party in Sweden that was created in 2005 by a white feminist named Gudrun Schyman as a way to intervene in the Swedish “patriarchal” parliament  by pushing forth a feminist agenda.

The election was seen as a success for African women who identify as feminists, however, Kawesa being elected as the Chairwoman for F!, did not mean much to the majority of African women. That is to say – African working class women.

The win was short lived, however; Kawesa left her position in September – just a few months after she was elected – claiming that she couldn’t take on the position due to her “life circumstances” of being a single mom of two, working full time and completing her thesis.

Apparently the reality of life as an African working mother – even as an intellectual –  does not mesh well with holding leadership positions in feminist organization.

The conflicted identities of Victoria Kawesa

Victoria Kawesa stands for a feminist petty bourgeois ideology, that seeks to integrate into the colonial system with the aim of fixing it by “fighting patriarchy” and “ending racism.”  There is no plan to overturn imperialism.

With that being said, whenever someone claims to speak in our interest but doesn’t – Victoria Kawesa in this case –  we need to be able to expose their contradictions to the masses!

For those that don’t know, Kawesa is rather contradictory. She identifies herself as an “anti-racist intersectional post-colonial black feminist”; an identity that assumes that we are no longer oppressed by a foreign power and that fighting to make white people (white men in particular) like Africans and other oppressed people, is a an end-goal.

She actually has built up her career around gender and been promoted through academic feminist platforms to speak on issues pertaining to the gender contradictions women experience.

Not too long ago, however,  Kawesa participated in a seminar that discussed ‘women and gender research’ in Bergen, Norway where she was stopped on the street by the police who asked her to present her identification.

She couldn’t comply with the cop because she had left her identification in her room. The Swedish [white] woman that was in her company asked  the police , “Do you want to see my ID as well?” and the police replied, “No it’s not needed because you have a Norwegian [white] appearance.”

When the police moved closer to Kawesa, she ran to her hotel room and locked herself in  because she was afraid to get arrested.

After this incident Kawesa has stated many times that she is outraged because she had been racially profiled.  Racial profiling is not something that happens because of gender but because one is part of the oppressed African nation.

Just like another petty bourgeois academic, Dr. Henry Louis Gates who was arrested while trying to gain access to his home back in 2009, Kawesa learned that  having access to white people, white platforms and white ideology cannot save you from the colonial reality – African people are an oppressed and subject people under capitalist imperialism.

Feminism did not prepare Kawesa with the understanding that she is a colonial subject under the imperialist system and that the police are the armed militia of the white ruling class or that the imperialist State apparatus is the reason why she had to flee from Africa to Europe in the first place.

She has not yet learned that it’s a waste of time to “fight racism” because this system is based on the oppression of colonised people and benefits from our exploitation.

What Kawesa experienced in Norway is nothing new to what the poor and African working class African communities face in Norway and Sweden. This small incident can’t even be compared to all the contradictions we face on a daily basis.

Everything from having to flee by boat over the Mediterranean, getting killed by the police, to having our children kidnapped by the imperialist State. The same State that Kawesa herself wants to be a part of!

The question I want to ask Kawesa is, how much sense does it make to claim to be an ‘anti-racist intersectional post-colonial black feminist’ in your interaction with the police, when they clearly have the power to do whatever they want to do with you?

You cannot claim to be living in a postcolonial society when you are obviously treated as a colonial subject by a female cop in front of your “feminist sister,”  who even though she “sympathises with your struggle,” is clearly a contradiction to your stance.

Clearly it didn’t mean anything, because African people don’t have power in this system!

The aim now is to change that dynamic and push forth an agenda of the African working class that will amount to the overthrow of capitalist imperialism.

Kawesa’s contradiction, shows that we cannot rely on African petty bourgeoisie forces in our communities since they only want to protect their own interest at the cost of our liberation as a nation!

Feminism does not speak to the interest of African working class woman.

In Sweden, just like in many other places in the world, there is a special oppression of the African working class woman that Feminist Initiativ doesn’t talk about and that they won’t and cannot solve!

Even though feminism is a bourgeois ideology there are still too many African working class women that unite with F! and adhere to feminist principles.

This is primarily because African women did not have any other significant ideology that could describe what was happening to us under colonialism.

Instead, many of us have been pulled into the gender politics of Feminism that often do nothing more than describe the symptoms of colonialism, such as patriarchy and violence.

Feminism does not have the interest to overturn the colonial conditions that are faced by the majority of the people on earth. Feminism is a bourgeois ideology that only  serves to and protect the interest of  white power. Mostly in the name of “equal rights” and “anti racism”.

The goal of ANWO in Sweden is to organise African women so that we can respond, in an organised manner, to the different issues we face as a consequence of the oppression from the white imperialist State.

African women are constantly being oppressed by the State and usually we fight in isolation due to lack of organisation. Therefore ANWO wants to develop programs in order to help  poor and working class African women, find our voice and power.

Not only that, but also bring our women into organisation so that they become an active participant in their own liberation struggle.

We need more African women to get involved in ANWO Sweden

What ANWO in Sweden wants to do is to have orientations on a consistent basis.What this means is that we want to gather African women and lay out the programs we have thus far and get the people themselves involved in the process to build and develop the programs.

The orientations will also provide the masses with political education, based on the perspective of the African working class, called African Internationalism which has been developed by the Chairman of The African People’s Socialist Party, Omali Yeshitela.

These orientations will also help us build one of our main campaigns, which is the ArrestCPS campaign. This campaign is crucial to build in Sweden and in Scandinavia since the State is kidnapping African children on a regular basis without facing any consequences;leaving African mothers and fathers alone in the struggle to fight for their children.

To be able to further build ANWO in Sweden and also in Scandinavia we want to hold conferences  with the participation of every African man, woman and child who want to see an end to this misery we live in.

We need to change the narrative

There are so many contradictions that we face as a colonised people. The reason why ANWO was created,is because we recognise that there is a special oppression of oiir and  working class African woman.

Everything from horizontal violence, children being kidnapped by the State to  Female Genital Mutilation. These attacks on African women are caused by our colonial relationship to the white imperialist State.

There are also contradictions between the African woman and man.However – these are the symptoms of the State violence that has been imposed on us as a people since the first attack on Africa.

When African women  jump on the feminist bandwagon, they simply join the oppressor,since it was born out of the white women’s struggle to have the  slice of the imperialist pie, as their male counterparts.

ANWO can see and fights for a new world where there is no oppressor/oppressed relationship.

In order to get there, however, we need to come to the conclusion that we need to do for ourself and not rely on the system that is responsible for our oppression in the first place!