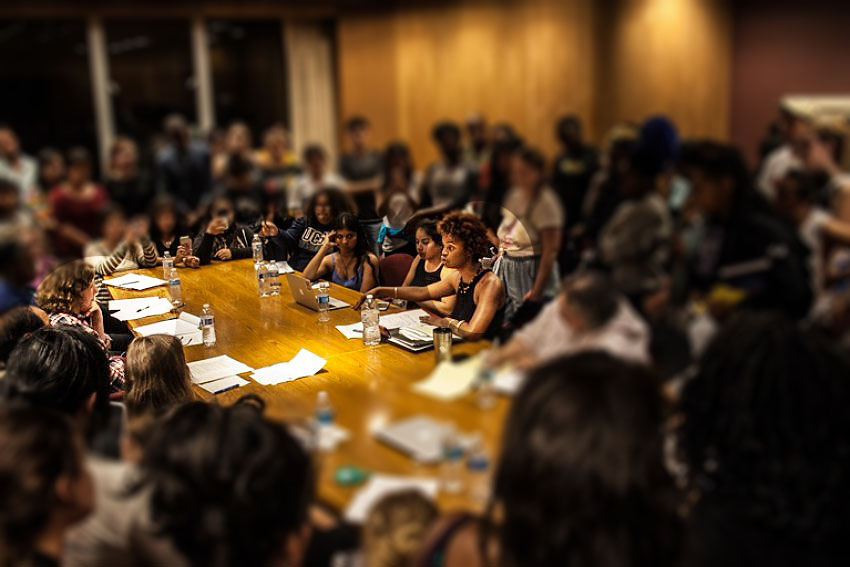 Ro’Shawndra VS the University of California Santa Barbara

“UCSB washed their hands of me just because I was raped in Isla Vista and not on campus,” …“What does that mean for the resources that I should be allocated appropriately with the advocates that have my back?”. – Ro’Shawndra Earvin

This is a quote from an African woman, Ro’Shawndra Earvin, a fourth year student at the University of California, Santa Barbara (UCSB), who was sexually assaulted in the Isla Vista community just outside campus in January 2017. Isla Vista is an unincorporated community and census-designated place in Santa Barbara County, California, where most students who attend UCSB live.

As African students, we make up about five percent of the campus population and although we pay the same tuition and student fees as everyone else, the university does not allocate us a proportionate amount of resources as it does our white counterparts. A prime example of this is reflected in how UCSB handled Ro’Shawndra’s rape case. According to Ro’Shawndra, the university violated her rights after she was raped in Isla Vista back in January by not providing her sufficient and adequate resources or assistance.

Because she lacked adequate resources and support from the university, the District Attorney’s office dismissed her case due to insufficient evidence. During a protest held by Ro’Shawndra in March, she asserted that “Accountability is going to be held where our money goes,” and that is the University of California, Santa Barbara.

In the article, the writer praises the claim that UCSB is a utopia by stating that, “If that’s not something that makes you proud to be a Gaucho [UCSB’s mascot] then I don’t know what is [sic].” The article also goes further to claim  that “Not only are we all surrounded by the natural beauty of Santa Barbara, but we have an impeccable campus, over 300 days of sunshine and the big blue ocean right at our front door.”

The Tab article reflected the experience of the White students on campus. The same White students who benefit and live off the stolen land and resources of African and indigenous people. The University of California Santa Barbara is built on land that was stolen from indigenous people, whom white settler colonists have sought to exterminate in the ongoing genocide that started in the 15th century.

The Tab article reflected the experience of the White students on campus. The same White students who benefit and live off the stolen land and resources of African and indigenous people. The University of California Santa Barbara is built on land that was stolen from indigenous people, whom white settler colonists have sought to exterminate in the ongoing genocide that started in the 15th century.

The article goes further to ask, “What else does a person need to be happy at their school?” Well as a colonized African student on this campus, I need freedom. The same freedom that was stolen from African people 600 years ago when we were forcibly brought to this hemisphere as slaves and subsequently colonized in Africa. As an African on this campus, I am not happy because not only do I pay thousands of dollars yearly for a colonial Eurocentric education; I also have to deal with white students calling me “nigger” as they drive pass me on the streets of  Isla Vista. As a result of the destruction of African life and knowledge systems through colonialism and parasitic capitalism Africans have been forced to see these institutions as a path to “making it out” of colonial conditions. But what is “making it out” when the police could stop, arrest and murder you on the streets on your way home from school because you are African, similar to how they murdered Michael Brown Jr., or violated countless other minoritized students in IV?

The rape and looting of Africa and African people began  centuries ago when Europeans kidnapped us from our land and made us slaves in America, the Caribbean, Central and South America, lands that were seized from the indigenous people through the same form of violence. The live of African people under colonialism is a life filled with rapine and violence. Institutions like UCSB sustain and propagate this cannibalism.

When Ro’Shawndra stood up as her own counsel after she was drugged and raped, she assumed the role of the state, gathering evidence and making her case, on her own behalf. However,  the  case was not only rejected by the District Attorney’s office due to “insufficient evidence,” but it was also mishandled in several ways by UCSB, according to Ro’Shawndra. We understand that this is  the kind of relationship that African, indigenous and other minoritized people have with the state; wherein the police are there only to enforce the law in ways that seek to protect and serve the white community. These are the same police that arrest people on the sidewalks of Isla Vista for “looking” intoxicated, and raid parties for noise complaints by white neighbors but claim to not have sufficient evidence when an African woman is raped.

That is why we demand Black Community Control of Police, a strategy under which the sexual assault of African people will be taken seriously and investigated at the behest of the victim and the African community at large.

UCSB undergraduates pay about thirty thousand dollars per year to attend this institution, and pay the most student fees in comparison to all the other “UCs” such as UCLA and UC Berkeley, both campuses that fall under the University of California umbrella. With that being said, the UCSB campus resources, including UC Santa Barbara Police Department, was still unable to handle Ro’Shawndra’s case. These are public facts, which Ro’Shawndra shared in her meeting with the Associated Students Senators on campus. She totally lacks of faith in the institution that “washed its hands off her.”

On the third of May 2017, Ro’Shawndra led a night sit-in with a list of demands to UCSB. Ro’ Shawndra demanded reparations for the ways this institution failed her and all the other African students who pay thousands of dollars to come here but are met with mediocre resources and a colonial curriculum. Some of her demands included that her tuition debt be paid in full, the freedom to transfer to a different UC for her last remaining quarter, and access to a survivor resource center in the future.

Here are the 12 demands:

1)   Create and fund a Survivor Resource Center which must include and provide the following:

2)   Counseling and Psychological Services must provide adequate and timely mental health services to survivors and their families, and coordinate with the Survivor Resource Center in order to enforce priority scheduling for timely intakes.

3)   Update and sign Memoranda of Understanding (MOUs) between UCPD and Isla Vista Foot Patrol, as well as other local bodies of law enforcement, to include the following:

4)   Work with UC Santa Barbara and Santa Barbara City College to develop a way for SBCC to be more transparent about students who have been disciplined for Title IX violations regarding current or former students, and work in conjunction in order to prosecute and process sexual assault cases that happen between students from both campuses.

5)   Develop incentives for faculty and other academics to develop courses and conduct research studying the culture of rape in Isla Vista, such as research grants and support from the Academic Senate.

6)   Work with the Isla Vista Community Services District to develop a report card for government institutions and law enforcement agencies, for behaviors and education surrounding rape and sexual assault in Isla Vista, including:

7)   Create a policy modification to Title IX Campus Implementation, which allows sexual assault survivors to transfer to a different educational institution if they desire.

8)   Work with local government to fund increased lighting and improved infrastructure in Isla Vista, specifically on Slough Road, in order to make it a safer environment for residents.

9)    Organize a meeting with all UC Chancellors on our UC Santa Barbara campus to develop system-wide level changes, reflecting the resources that are needed in every campus.

10)  Add Queer Connect (a CARE Project) to reporting and trainings in order to make queer and trans* folks safe and their reporting process private in order to protect them. In any process be certain that queer and trans  survivors’ correct pronouns are  used in communication and in any and all paperwork regarding their assault.

11) Demand that UC President conduct yearly UC tours, where they will hold a public Sexual Assault/Sexual Violence Town Hall at every single UC campus once per year, in order to hold them publicly accountable and provide spaces for students to directly communicate demands and grievances to UCOP and to the UC-wide administration.

12) Demand that Chancellor Yang and his office continuously update students publicly about the progress being made on these demands.

If adequate progress is not made or if this is not properly communicated to students, the university administration must make a donation to the Survivor Fund and to survivor-related resources on campus.

We will develop a process to ensure that the following personal demands of Ro’Shawndra Aquilla Earvin are met:

Agreed, in consultation with the Academic Senate.